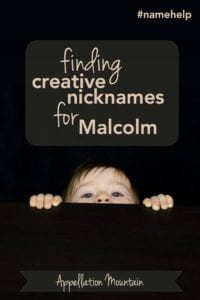 Elizabeth writes:
My husband really really likes the name Malcolm. I don’t mind it, but I don’t love it either. I was thinking that maybe I’ll get more on board with a super cool nickname … but I’m having a hard time coming up with one!
The only ones I see are Mac or Colm, but neither of those really do it for me. I’d love all of your super creative outside the box suggestions! His middle name will Kelly or Andrew.
Thank you so much!
Please read on for my response, and leave your thoughtful suggestions in the comments.
Dear Elizabeth –
Malcolm is such a handsome name! But it is a little light on nicknames – at least at first glance.
Before we move on to creative Malcolm nicknames, though, let’s discuss exactly how you imagine using the nickname.
Is it something you want everyone to use exclusively? Our daughter has an unconventional nickname which she uses 99% of the time. Most people assume it is her given name, which is fine with us (and her – at least so far).
Or are you imagining a name that you’ll use at home? He’ll be Malcolm at school and maybe Mal on the soccer field, but something entirely different to you – and maybe to other close friends and family?
In either case, you have plenty of options. But if it’s the latter, you can fearlessly add nicknames like Buddy and Bear and Champ and other super-cute possibilities to your lists.
If it’s the former, I assume you’d like something more name-like, even if it is more casual than Malcolm.
So besides Mac and Colm, how about:
Cole – I like Colm in theory. But the sound is a little foreign to my tongue. Drop the ‘m’ and you have just plain Cole. It’s current, stylish, slightly more casual, and clearly derived from the sounds in Malcolm. It’s also my top pick, which is why it’s here at the very start of the list.
Cal – Purists will scratch their heads and ask how you could possibly get Cal from Malcolm. I agree – it’s not an obvious way to get to Cal. (I’ve got a list of those!) But plenty of traditional nicknames aren’t straightforward – there’s no B in William, and explaining Molly’s evolution from Mary is a tough one.
King – Okay, I concede that this is almost like calling your kiddo Sonny or Cub. And yet, four kings of Scotland answered to Malcolm; a fictionalized version of Malcolm III appears in Shakespeare’s Macbeth. Malcolm called King could work for the right family.
Mace – What if you add an ‘e’ and made Mac into Mace? Just like my argument for Cal, there are plenty of widely accepted nicknames that function similarly. If you can get Kate from Katherine, why not Mace from Malcolm? This brings it closer to the chart-topping Mason, of course, and also Samuel L. Jackson’s Jedi Master from the Star Wars universe, Mace Windu. If boys are being named Kylo …
Max – With so many Max names out there, using Max for Malcolm will take others by surprise. And yet, I think it would work.
Pax – While I’m thinking of Max, Malcolm comes from Columba, a Latin name meaning dove. Dove doesn’t seem like the most masculine of nicknames. (Though Dov is a Hebrew given name meaning bear. Confused yet?) But since the dove is a symbol of peace, Malcolm makes me think of Pax – the Latin word for peace. Okay, this is a stretch, even by my highly elastic standards. But I’m throwing it in there … and hey, maybe that’s even a better case for Bear …

You’ve mentioned that the middle names you have in mind are Kelly or Andrew. I love them both, but I wonder if you’d consider another middle, in order to find a nickname you love? The obvious suggestion is choosing something to get to the initials M.J., which seems like an easy, friendly nickname option. Though other combinations could work, too. I really like the idea of M.T. called Emmett – perhaps farther than many would consider, but an intriguing thought.

I’m sure there many more possibilities, so readers, over to you: what are your best suggestions for creative Malcolm nicknames?