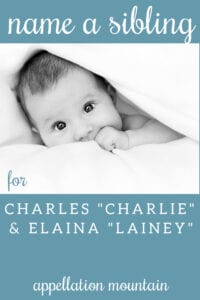 I’m pregnant with baby number three and need some names! I don’t know yet if it’s a boy or girl.

This baby will join Charles Walter “Charlie” and Elaina May “Lainey.”

Our last name rhymes with Barnes, but starts with St.

I am much more open than my husband who likes more traditional names, but we do tend to like unisex names, too. Any suggestions would be so appreciated!

You’ve landed on such an interesting way to compromise: more traditional firsts, paired with sparkier nicknames that lean unisex.

I’m guessing that your tastes might be slightly more classic for boys than girls – not because of anything you’ve written specifically, but because often feel a little freer naming a daughter than a son.

A BROTHER FOR CHARLIE and LAINEY

ANDREW/DREW – Andrew peaked in the late 1980s and early 1990s. Since then, it’s mellowed into a solid classic. While Drew Barrymore makes us see the possibilities for Drew as unisex – and Andy/Andie/Andi has long done double duty – today it feels more like a brother for Charles-called-Charlie.

CAMERON – Speaking of the 1990s, there’s a whole class of handsome boy names that reached the boys’ Top 100 three decades ago and then slowly rose for girls, too. But many of them – not only Cameron, but Dylan, Ryan, and Evan – remain mostly masculine. Charlie, Lainey, and Cam sound great together.

JESSE/JESS – Sometimes Jess is Jessica … other times, it’s Jesse. An Old Testament favorite with a cozy vibe, Jesse works beautifully for a son born today. It’s traditional, but a little bit surprising, too.

JULIAN/JULES – Julie names have had a good run for girls, but lately it’s Julian – for the boys – that ranks highest on the US popularity charts. And Jules, originally the French masculine form of Julius, works as a unisex nickname for them all.

CHRISTOPHER/KIT – Game of Thrones alum Kit Harington put this British nickname for Christopher on parents’ radar. It’s crisp, brief, and wears well in an age of Jack and Cole.

TATE – I’m not sure about a formal name for Tate. There’s Tatum, of course, but I’m not sure that quite matches Charles and Elaina. But I love the way it sounds with Charlie and Lainey, so I wonder if you’d consider just Tate, no formal name necessary?

QUINTON/QUINN – While Quinn ranks in the girls’ Top 100, the best formal names – like Quinton – tend to fall on the boys’ side of the charts.

A SISTER FOR CHARLIE and LAINEY

JOSEPHINE/JO – If there’s a classic example of a feminine name with a boyish nickname, Little Women’s Jo March is it. While Jo sounds great with Charlie and Lainey, visually it seems a little brief, doesn’t it? Another potential Josephine nickname that might appeal is Finn – and, of course, there’s always Joey.

KATHERINE/KIT – Katherine might be a little too classic for you. But nickname Kit – yup, just like on the boys’ list – transforms Katherine from regal and saintly to adventurous and daring.

CLARICE/REESE – This might feel like a stretch, but the sound is there. Patrice works, too, as do even more obscure names, like Catrice, Cerise, and Caprice. But Clarice comes closest to sounding traditional.

ROSEMARY/ROMY – Americans usually shorten Rosemary to Rosie or Rose. But Germans contract the name to Romy, taking this classic, vintage name in a sparky direction.

WILLA/BILLIE – Wilhelmina is long and dramatic; Willa seems compact and accessible. Both come from the evergreen boy name William, and they could also borrow built-in nickname Billie.

Hands down, my favorite name for a son is Julian-called-Jules. Except I’m not sure about Jules with your surname.

It sort of depends on how you use your child’s nickname. Is it mostly at-home and among friends? Or would you expect the nickname to be used in all sorts of semi-formal places – school assemblies, sports teams – where it’s more likely that his first and last will be said together?

Because in the case, my votes goes to Kit, as a nickname for Christopher. (Or even Christian.)

For a girl, Rory is my favorite nickname. But which formal name to choose?

Caroline is elegant and matches well with Elaina … but, strictly speaking, it’s another form of Charles. (Via the Latin Carolus.)

Dorothy is my next pick, because I like it with both Elaina and Charles.

But in terms of formal names and nicknames, I think Georgia-called-Georgie might be exactly right. It’s casual and fun to say, but still anchored by a traditional, feminine name.

Readers, what would you suggest as a sibling name for Charlie and Lainey?