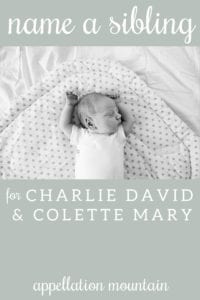 My husband and I both have C names (Cara and Chris/Christopher). Our favorite boy name was always Charlie David (not Charles!) and we named our daughter Colette Mary, even though I sort of wanted to break away from the C names.

Our third (and last) baby is due this summer and we need help coming up with another C name. We don’t know the sex, so we’re looking for boy and girl names.

PS – We really thought about it and we WANT another C name.

Congrats on your new baby!

I promise I won’t try to change your mind about C names.

But … I do want to dig a little into your criteria. Your first one is no nicknames. Except your son is Charlie – not Charles! – so I wonder if that’s a general feeling that might not apply to every name? And, of course, if Charlie is the exception that proves the rule, that’s fine, too. But it’s worth pondering.

Or do you mean that any name can’t possibly be shortened further? That’s a challenge, too – if only because it tends to leave you with only the shortest of the short names. Cal, maybe? And I’m not sure that sounds substantial enough, either – though it could certainly work.

I mention this because the pool of names you’re working with is pretty small – particularly assuming you can’t duplicate sounds in Charlie or Colette, and you probably don’t want anything too close to Cara or Chris. (Though my suggestions include some names that play off your own, which could work beautifully.)

Another factor: Charlie and Colette both hit the sweet spot. They’re familiar without being Top Ten choices. I wonder if you’re willing to veer a little more into uncommon names? Or consider something slightly more popular?

Let’s dig into the names!

A BROTHER FOR CHARLIE DAVID AND COLETTE MARY

A surname name that sound distinct from Charlie and Colette, but still fits your family’s overall style.

It’s just inside the current US Top 100, and it plays off of mom’s name – Cara. That might be exactly right for your third child!

If Carson was inspired by Cara, then Christian comes from Chris/Christopher.

Clayton almost-kinda-not quite caught on in the 1980s and 90s, which makes it feel a little dated. Except it never came close to making the Top 100. And it fits in beautifully with so many names right now, from surnames like Carson to modern favorites like Cayden.

My best suggestion for an alternative to Cole. It reads slightly more modern, but I think it works with Charlie and Colette. I can’t decide if it’s an issue with your surname, though.

Is this just too different? The sound is upbeat and energetic, and very different, too. Which is why it works!

A SISTER FOR CHARLIE DAVID AND COLETTE MARY

Just like Clayton feels slightly 80s, so do the Cass names. Plus, Cassandra strikes me as maybe a little too frilly next to Colette. And Cassie might be a nickname issue – plus the ending repeats Charlie’s sound. Still, I like Cassie with Charlie and Colette, so it’s on the list.

As with Cassandra, I’m not sure if Cecilia is a style match for Colette – though maybe it comes a little closer? My favorite is Cecile. Rare, but familiar – and the soft C makes for a different sound while still keeping the C theme.

Another soft C sound, though perhaps the ‘t’ ending is too close to Colette?

Soundwise, Chloe falls sort of midway between Colette and Charlie, and yet I think it’s distinctive enough to consider. Of course, there are more Khloes-with-a-K than you might expect.

A very classic name, simple and spare but still rich with style.

My first thought was Cora, except that’s awfully close to Cara. The same goes for Caroline. But maybe Coraline hits the mark?

Overall, my pick is Carson for a boy. Yes, it’s relatively popular. But it checks every box on your list and it has a sweet nod to mom’s name.

As for a girl? I’m torn, but I’m going with Claire. It’s classic like Charlie, vaguely French like Colette, and nicely spare and tailored, too.

Readers, what C names would you suggest for Charlie and Colette’s sister or brother?