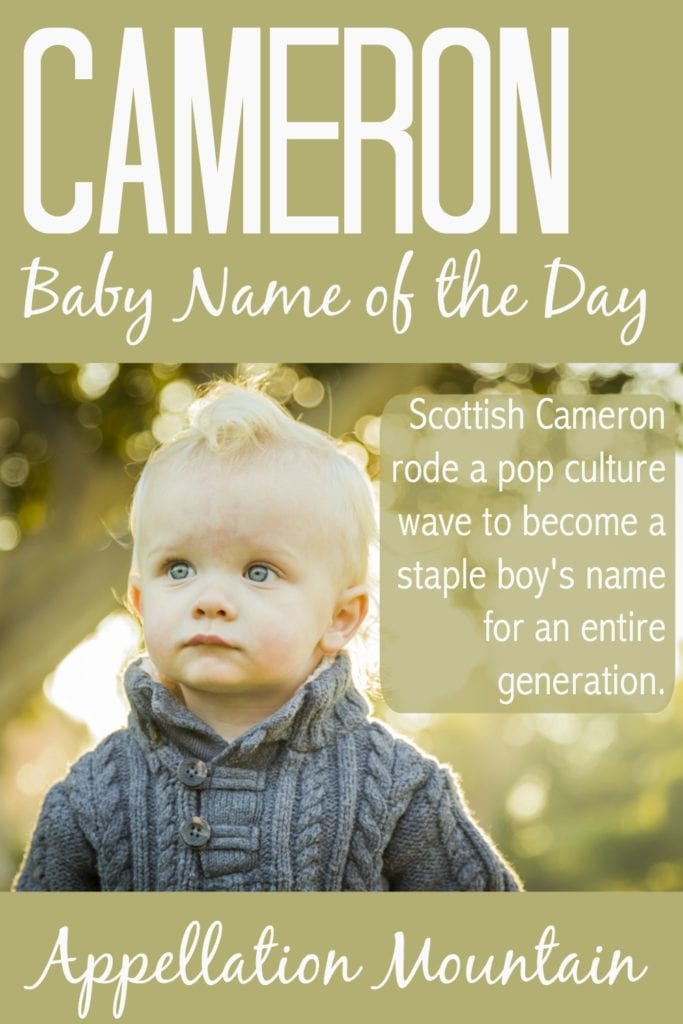 Cameron feels like a friendly Scottish possibility somewhere between on-trend and traditional.

Top 100 month wraps up with this Baby Name of the Day.

Back in the day, surnames sometimes came from nicknames. Nicknames might refer to a physical trait, like a brown-haired Brown. In Gaelic, cam means crooked and sròn means nose.

Other theories exist, but regardless of origins, it became a very common Scottish surname.

Like many common surnames, it saw sparing use as a given name from the nineteenth century into the 1940s.

Not only is there a Scottish clan by the name, but the regiment they sent to Flanders in 1794 existed into the 1960s, as the Queen’s Own Cameron Highlanders.

Legend tells that the clan traces its roots to the year 500 or so. A Danish prince came to help restore King Fergus II of Scotland to his rightful throne. The prince’s crooked nose inspired the name of his descendants, who remain in Scotland all these centuries later. Historical evidence is lacking, but the story persists.

Some credit for the name’s early appeal might go to actor Cameron Mitchell. His first film roles came in the mid-1940s, but he hit it big as Buck Cannon on television Western High Chaparral in the 1960s.

Then James Cameron directed 1984’s The Terminator. It would become the first in a long string of hits.

In 1985, child star Kirk graduated from guest roles to center stage as Mike Seaver in Growing Pains. The number suggest that the popular actor boosted his surname.

But perhaps more important was 1986’s Ferris Bueller’s Day Off. Ferris explored Chicago with his girlfriend Sloane Peterson and best friend Cameron Frye. The trio tooled around in a vintage Ferrari belonging to Frye’s dad.

In the 1990s the name faced a challenge. Cameron Diaz became a major star, and the name rose for girls. Camryn Manheim landed a role on The Practice. K spellings emerged, too.

We tend to assume that names go girl, and cease to be appealing for boys. But this is one of several that disprove that assumption. It reached the girls’ Top 200 in the late 1990s, around the same time it cracked the boys’ Top 40.

But it faded quickly for girls, along with those alternate spellings.

In recent years, it has left the girls’ Top 500, but remains around the 50 mark for boys.

Actors by the name abound. So do athletes, like the NFL’s Cam Newton.

Factor in famous people with the surname, and it’s even more common, like British prime minister David.

It’s also the godfather of many other Cam- names. Camden, Camilo, Camila, Camille, Camilla, and Kamari all share the stylish first syllable. Respellings like Kamren and Camron also chart in the US Top 1000.

Add it up, and this name feels like a true modern staple. We don’t know many grown-ups with the given name, but it’s not completely novel. And while it’s become familiar for small boys, it’s not as often heard as Logan or Mason.

If you’re after a modern name with a traditional feel, Cameron could be the one for you.

What do you think of this name? Do you like it better for a boy or a girl?