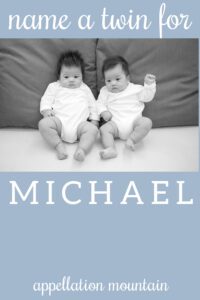 My husband and I are hoping you can help us decide on names for our twin boys due in May.

We first landed on the name Michael for our boy name. It is my husband’s father’s name, and we both like it.

Here are a few of our considerations:

Here is a current list of first and middle names on our radar but we are open to – and desperately need – suggestions!

Zachary is my husband’s name. Is it strange for to name one twin after the father? We also considered naming the second twin Zachary but calling him by his middle name, but that raises additional questions.

Here’s the story behind Christopher. When we were trying to conceive my mother-in-law had a dream that there were two little boys in our family, one of whom was named Christopher. I didn’t think much of her dream … until we found out we were expecting twin boys!

In addition, several friends unprompted have suggested the name Christopher to us. Aaaand … my name was supposed to be Christopher – my parents thought I was a boy up until birth!

All this to say — perhaps the second twin is trying to name himself! I love the name Christopher but my husband is lukewarm.

Michael (and Zachary for that matter) is such a common, traditional name. I like the idea of pairing it with a classic but perhaps uncommon middle name (such as Ambrose?) to jazz things up a bit.

Let’s start with some of your questions before we dive into names.

DO BOTH TWINS NEED A FAMILY NAME?

Plenty of parents give their firstborn a family name – sometimes because of custom, but often because they just want to. Future children receive names the parents just plain like. And that’s fine. Maybe it creates a little bit of jealousy. Or pressure to live up to being James Edward Smith IV. But mostly? My guess is that it fades into the background pretty quickly.

Twins, though, do feel a little different. And I generally think that if one twin is going to receive a family name, the second should, too. But it doesn’t have to be perfectly balanced. One son could be FamilyNameFirst NameYouLoveMiddle, while the second might be NameYouLoveFirst and FamilyNameMiddle.

Being named after your parent is immediate and obvious. It’s inescapable, especially when you reach a certain age and can be confused for each other.

On the other hand, my son is named for his grandfather – and no one knows unless we specifically mention it. How would they, unless they know your extended family?

DO THE NAMES HAVE TO MATCH?

While you’re right to avoid anything too matched, looking for balance feels like the right instinct.

Happily, there are lots of ways to balance out your boys’ names. I’d consider Eleanor and Louise perfectly matched, even though Eleanor is a Top 25 name and Louise doesn’t crack the current Top 500.

Take Vincent and Michael. They have different roots and histories, but they work well together – two traditional favorites that have stood the test of time.

NAMING A TWIN BROTHER FOR MICHAEL

My first thought is this: you’re on the right track. Michael is a family name you both agree on. And while Mike is a dad name, Michael is fresh and handsome for a son. Pair it with an interesting middle name, like Ambrose or Ernest or Everett, and you’re there.

I’m tempted to push you to choose a name you both like for your second son – Everett, Ezra, Isaac, Jasper, Vincent –  with the middle name Zachary.

It ensures that both boys have a family name. But giving the weightier family name – dad’s – to the second son as a middle? That feels like the right balance to Michael. Plus, Z is a cool middle initial!

The name that leapt out from your list was Isaac. Michael MiddleName and Isaac Zachary.

Except … they could be Mike and Ike. They don’t have to be! The non-name obsessed might never notice. (And I grew up down the street from the place Mike and Ike candy originated, so I might be more Mike-and-Ike aware than many.) But it could be. It wouldn’t be a dealbreaker for me at all, but I can see that it might rule the names out for many parents.

Still, lots of names work in this loose framework. We’ll get back to that in a minute …

BUT FIRST, WE NEED TO TALK ABOUT CHRISTOPHER

So … is Christopher a family name?

Obviously, it fails the most specific test: there is no immediate family member with the name. Or any form of the name. (At least of which you are aware.)

And yet, the story behind Christopher beats out the stories behind Michael and Zachary and any other family name you’ve mentioned, right?

It’s a significant name, even if isn’t specifically found on your family tree.

Christopher pairs nicely with Michael. They’re both rock solid classics that enjoyed a burst of popularity in the later half of the twentieth century, before mellowing in use. Now they just feel like traditional names.

I wonder if your husband hesitates because Christopher feels more likely to be shortened? I know one young Christopher, who never uses a nickname. And really, we live in an age when lots of children answer to Oliver, Julian, or Isaiah – no nickname, thanks.

If not one of the names on your list, would you consider:

There’s something dashing about Anthony. It’s traditional, familiar, and yet relatively uncommon.

A Biblical name that splits the difference between buttoned-up Joseph and current favorite Ezra.

Is two M names too much? Michael and Matthew are perfect brother names, distinctive despite the shared first initial.

Gen Z grew up with Peter Parker, making this a superhero name – as well as a classic.

Never out of style, Thomas is darling when shortening to Tommy. But it’s even more handsome when used in full.

I’m still tempted to put Michael Everett (or Ambrose or another name you just love) and Isaac Zachary at the top of the list.

But it’s not perfect, so maybe …

Okay, I think you have lots of great options. Let’s open it up to others!

Readers, what would you name a twin brother for Michael? Do you have any fresh ideas for first or middle names?