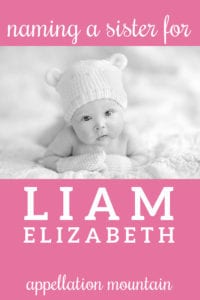 We’re “those” people. We gave a super-popular boy name to our daughter. Even though we get some looks, I have no regrets. But it’s making it harder to name our next baby.

Here’s the story behind Liam’s name: we lost my husband’s dad right after we found out we were pregnant. His name was William, and we immediately knew that if the baby was a boy, we’d name him William.

But then, at the ultrasound, when we found out it was a girl, we weren’t sure what to do. Our last name is C0st@. I didn’t like the idea of Willa or Willow, as they run into our last name. Wilhelmina is too much. And Billie sounded too cute.

In the middle of the night, looking at names again, I saw Liam. And I just kind of knew. I had a sweet aunt called Leanne who passed away when I was in high school. The sound of Liam reminded me of her name, too. My husband is pretty traditional about these things, so I figured he’d shoot it down, but he loved it!

We went with Elizabeth for her middle name because we figured she could always write out her full name on her resume if it was confusing to have a boy name. Sometimes we call her LeeLee for short, but mostly she’s Liam.

We’re due in December with another girl, and we’re stuck. I like lots of names, but it feels like nothing sounds right with our daughter’s name.

Here are our ideas so far:

Ryan – My husband likes this, and he thinks it can be a girl name because he went to high school with a “girl Ryan.” But I know lots of Ryans, all men and boys, and I have a hard time seeing it for a sweet baby girl!

Lucy – My favorite girl name right now, and one my husband says he likes. Except when I hear Liam and Lucy, I wonder if it’s too mismatched?

Clare/Claire – The name I’m warming up to. It’s a name on my side of the family, and I like that it’s not super-girly. But just like Lucy, I think it doesn’t really go with Liam’s name.

And that’s all we’ve got! I know we have time, but I’m starting to worry, because nothing seems like it goes with big sister Liam.

This is a tough one. You chose exactly the right name for your daughter at the moment, and it’s proved to be a choice that gives you joy. So there’s nothing but positive behind Liam Elizabeth’s name, and I’m so glad to hear that you still love it!

But it does set up an interesting set of choices for her sister’s name, because it sounds like Liam wouldn’t normally be your pick for a daughter’s name. The three suggestions you’ve listed illustrate those options nicely, so let’s talk about them a little more.

Some do give Boy Names On Girls a little bit of side-eye, but they remain very popular. Name your daughter Ryan Isabelle or Parker Caroline, and you’ve matched Liam’s name style perfectly. But it sounds like that’s not quite what you have in mind.

LUCY, OR ANOTHER FAVORITE NAME

There’s wisdom in choosing the name you love, every single time. Even if the resulting sibset sounds a little disjointed. Except there is something jarring about such different styles, and I can imagine Liam might resent being mistaken for Lucy’s brother at some point. Right now, you’re introducing “my daughter, Liam” and I suspect that’s easier for people to digest.

CLAIRE, OR ANOTHER COMPROMISE NAME

I’m not sure if Claire is sharply different from Lucy. I’d say they’re both traditionally feminine, compared to more conventionally masculine Liam. But I think this direction has promise. After all, you’d only be choosing Ryan to match Liam – not because you love the name. And you might feel a little pang of regret if Lucy feels too different from your older child’s name.

So while I see the appeal or Ryan or Lucy, let’s look for some more Claire-like names.

Strictly speaking, Briar counts as unisex. 420 girls and 277 boys received the name in 2018. But I think it leans feminine, but not so much that it feels like a mismatch with Liam.

Another unisex name, Eden is used overwhelmingly for girls in the US. It does sound rather similar to Liam, but I’m not sure that’s a bad thing.

Or maybe even Layne? If Lucy and Liam appeals to you, maybe another L name would work? Lane is used in much bigger numbers for boys; Laine is more common for girls. I love Liam and Lane together, for brothers or for sisters.

Liv is brief and complete, the kind of name that might be short for something – but isn’t. It’s Scandi, a name with Norse roots. It means protection, but it’s also the word for life.

If the possibility of Liam feeling like the odd one out really bothers you, I wonder if you’d call her sister Luca? It’s far more popular for boys, but in some languages, it is a feminine form of Luke/Lucas. And while I’d expect Liam and Luca to be brothers, I think it makes sense that they’d be sisters, too.

Maren is rising in popularity, maybe because it’s such a great compromise choice. It’s tailored, a surname-style choice. But Maren is actually a given name, a Scandinavian twist on Marina.

Another name that’s technically unisex, Quinn has appeared in the girls’ Top 1000 in recent years.

Like Briar, Rowan is used for boys and girls, another tree name with Irish style.

A spare surname name, Sloane is rising in popularity. And while it’s a surname, a history of female fictional characters – from Ferris Bueller to Entourage – have put this firmly in the girls’ camp.

My favorite name for Liam’s sister is Quinn. It splits the difference between names like Ryan, that are far more popular for boys, and Lucy, which feels traditionally feminine. Plus, I love the slight alliteration with your surname.

Would you consider a combination like Quinn Caroline or Quinn Lucille? I like Quinn Eleanor quite a bit, too.

And, of course, Luca is close to Lucy, and gives you two currently masculine names for your daughters.

But if you ultimately decide that Lucy is the right name, I don’t think the mismatch is a problem. Lots and lots of girls have “boy” names, and our definition of what makes an acceptable name for a son is – thankfully – expanding.

Plus, your story about how you chose Liam’s name is meaningful. Lots of children go through phases where they long for a different name, but having a great story to explain the choice helps.

Readers, your advice could really help here. What would you name a sister for Liam Elizabeth?