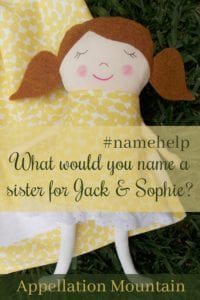 Update: “After weeks of discussion, we finally settled on Tessa Katherine. But then, in the hospital, I just knew she was Lucy Katherine! Thank you for all of the suggestions. It really helped to know how many people loved the name Lucy, too, and it wasn’t just a runner-up name.”

We had no trouble deciding on a name for our first two children.

Jack Harrison is named for my grandfather and my husband’s grandfather. Both named John, but always called Jack. Harrison is my maiden name. We knew this would be the name of our first son from when we first talked about a family.

Sophie Helen just kind of came to us. We like Sophie’s meaning (wisdom) and thought it sounded kind of old-fashioned and different. Helen is from both sides of our family – his grandmother, and my aunt. We also liked Sadie, Lily, and Lucy, but Sophie was the one we both liked best.

We’re expecting our third child. If it was a boy, we pretty set on Owen, with either Carpenter (from his mom’s maiden name) or maybe Michael (my dad’s name) as a middle. Like with Sophie, there wasn’t really any reason for Owen. We just like it a lot. And we might have more children, so I can see us having an Owen in the future even if this baby is a girl.

Where we’re stuck is girls’ names.

While we have other boys named Jack, it seems like there’s always another Sophie/Sophia/Sofia in the room. It doesn’t really bother me, but I wonder if it will bother her? My name is common, but it never bothered me.

We can’t use Sadie with Sophie, but I also feel like maybe Lily and Lucy are runner-up names. It also bothers me that we might have another popular name, but we mostly like names that are traditional.

Our last name sounds like Shoe and Burt put together. We don’t have a middle name in mind this time, though it might be Elizabeth (my middle name) or Katherine, for me. (I’m not Katherine, just Kate, but I like Katherine better as a middle name. Is that weird?) Also, are these boring? We could keep looking, but until we have the first name settled, it seems hard.

Jack and Sophie go together really well, and it seems like you have lots of family name connections to consider.

I think you’re wise to choose first name first, so let’s focus our attention there.

Some families keep names on their shortlist for every pregnancy. So if Lily was almost Sophie’s name, it would definitely become a future daughter’s name. But other families start fresh with every child. There’s no right or wrong answer.

But since it sounds like Lucy and Lily are out this time – and I agree, Sophie and Sadie are pretty close – let’s start fresh.

Ada – I keep thinking about girls’ names ending with a, especially shorter, two-syllable possibilities. It seems like you prefer names that are a little bit vintage, or at least not too modern. I can imagine Emma working well with Jack and Sophie, but since popularity is a concern, let’s look at names like Emma. Ada seems like a great match for Jack and Sophie, but there’s also Willa. Ada charts in the mid-300s, and while there are lots of Addie names (Addison, Adeline, Adalyn … and so on!) Ada feels short, sweet, and complete – which makes it stand out just the tiniest bit. Read more about Ada here.

Edie – If you love Sadie, but want to avoid something too close to Sophie, would you consider Edie? It’s very similar in sound, but that strong ‘e’ makes it distinctively different, too. Edie isn’t in the current US Top 1000 – what, I know!? – but Edith does fall in the 400s.

Lena – It sounds like you love L names, like Lily and Lucy. Would you consider Lena instead? It feels mainstream and familiar, but actually ranks in the high 200s. Read more about Lena here. 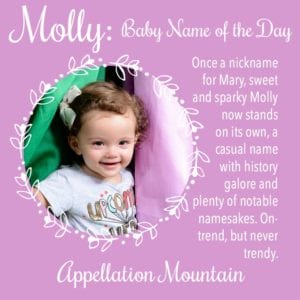 Lila – Or, if not Lena, maybe Lila? The downside of Lila is that it might suffer from the same phenomenon that makes Sophie feel more familiar. Lots of girls answer to names like Lily, Layla, and Delilah – which makes all of those L-l names seem far more popular than the numbers would suggest. Lila sits just beyond the current Top 200, but if Sophie/Sophia/Sofia frustrates, then Lily/Lila/Layla might, too. Still it’s a gorgeous name that pairs well with Jack and Sophie, so I’m leaving it on the list.

Mia – Yes, Mia ranks in the current US Top Ten, which is a reason many parents pass this name by. And yet, it’s the opposite story from Lila. Fewer names sound like Mia. There are some – Mila and Maya – but that’s still many fewer. If you’re not hearing Mia much in your neck of the woods, I think it could be a great sister name for Sophie and Jack. Read more about Mia here.

Molly – Or maybe Molly? Molly has the same casual but traditional feel as Jack and Sophie. It’s fallen out of the Top 100 in recent years, but still wears well. Read more about Molly here. 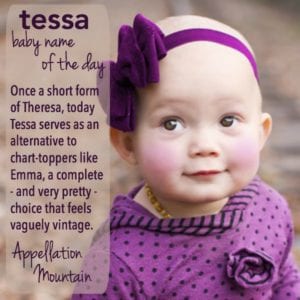 Nora – Lots of families love Nora, and yet nothing much sounds like Nora. (Sure, there’s Cora – but the C and N sound distinctly different.) Jack, Sophie, and Nora all combine a vintage sound with a modern sensibility. Read more about Nora here.

Tessa – I’ve saved the best for last, I think – how ’bout Tessa? Just like Jack started out as a nickname for John, Tess and Tessa were once short for Theresa. Today, though, it feels like a stand-alone name, less popular than Ella or Emma, but with the same vibe. It ranks in the low 200s – popular and familiar, but far from over-used. Read more about Tessa here.

I think these names hit the right note for lots of reasons. If your biggest concern is popularity, I suspect these will all feel less wildly popular than Sophie. (Though I have some reservations about Lila!) And I think they’re all nickname-proof, vintage-but-current options.

Tessa is my personal favorite, with Ada as a close second, and I like them both best with Katherine.

Why? First, if you imagine having a son Owen in the future, I think it’s a good idea to avoid another long ‘o’ sound. (I almost suggested Rose, but Sophie, Owen, and Rose? Oh my!)

Tessa and Ada sound compatible, and yet completely different than Jack and Sophie.

But I’m curious to hear what others will suggest, because I know there are lots of options I’ve overlooked. Readers, what would you name a sister for Jack Harrison and Sophie Helen?