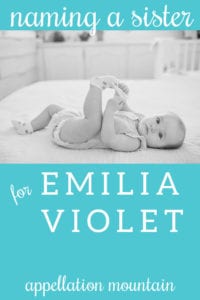 Our second daughter is due at the end of December, and we are stuck!

We named our first daughter Emilia Violet after lots of back and forth. I never really liked Amelia, because none of the nicknames seemed right. But I love Emmy for Emilia, and that’s what we (mostly) call her.

I’ve been surprised about how much it bothers me when people think her name is Amelia. And while we spell her nickname Emmy-with-a-y, we’ve gotten Emmie (I dislike this) and Emme (don’t mind, but it’s not her name).

Some names that I do like don’t work with Emilia. Like Cecilia almost rhymes, and Emmeline is obviously out.

Before Emmy was born, we talked about names like Sloane, Blair, and Hadley. But now that we have one daughter with a very girly name, going back to that list feels wrong, too.

In a perfect world, we’d find a name that matches Emilia’s flow, but also has a nickname – but that isn’t hard to spell. So far, though, I’m not sure if that exists!

Our last name is like Han-plus-son. Also, I’m Andi and my husband has an A name, too, so we really want to avoid another A, and maybe another E, too.

The good news: you know what you’re looking for!

The hard part? Naming a second child is that rare task in parenting that gets harder as we become more experienced and confident parents.

Let’s talk through some options that I can imagine hearing with Emilia “Emmy” Violet, and I know our readers will have more ideas, too.

A SISTER FOR EMILIA “EMMY” VIOLET

A classic name with a romantic vibe – think of Shakespeare’s Much Ado About Nothing, for one – Beatrice sounds like a sister for Emilia. The obvious nickname is Bea, but options abound. One hitch: it can also be Beatrix.

A Roman goddess name, Diana has one dominant spelling. It’s the name of the late – and beloved – Princess Diana. But more importantly for this generation, Diana is Wonder Woman. Di and Dee are logical nicknames. Ana/Annie might work, too.

If you’re ruling out E names, then Eloise is a non-starter. But Emmy and Ellie are quite sweet together, and Emilia and Eloise definitely don’t match too much.

Gen, Gigi, Evie, Vivi … the nickname options for this classic French import go on and on.

Elegant and spirited, Josephine is both a classic and a twenty-first century favorite. Nickname options are plentiful, but Josie and Jo are the most familiar choices.

I hesitate to suggest Juliet, because … well, the -ette spelling is more popular in the US for our daughters now, but I’m sure you’d get Juliet a lot, too. Still I think it has the same romantic, just slightly different vibe as Emilia, so it’s worth consideration. Plus, Jules is a great nickname.

If Louisa feels too frilly, Louise is every bit as lovely. Lou, Lula, and Lulu are all great nickname choices.

I think these kinds of naming situations are tough because you have to love both names – the formal and the short form.

That said, I’m drawn to Josephine “Josie” for you, as well as Rosalie “Rosie.” They’re clearly spelled one dominant way, and the nicknames are obvious and intuitive.

I’m also wondering about those surname-style names you considered for Emmy. Could you use something like Josephine Hadley Han-plus-son? Or Rosalie Blair Han-plus-son?

Readers, over to you – what would you name a sister for Emilia “Emmy” Violet?