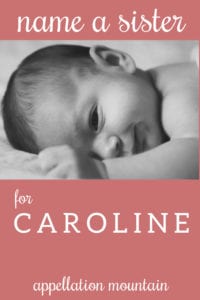 We are expecting our second child this summer. We have a 3 year old daughter named Caroline MyItalianLastName $chm!dt.

Since we were dating, we’ve always had one boy and one girl name picked out: Caroline for a daughter, James for a son.

We plan to use my last name as a middle name for this baby, too.

It recently dawned on me that we don’t have a name if this baby is a girl. We didn’t find out with Caroline and we don’t plan to find out this time, either.

But we probably need to have a girl’s name ready!

What we love about Caroline:

It does bother me a little when she gets Carolyn instead of Caroline, but it’s not a major problem. But other than that, her name is perfect.

Can you help us find another girl’s name we’ll love just as much?

How exciting to be expecting your second! It sounds like you know your style very well and you’ve been happy with Caroline’s traditional, but not all that common name.

One question that feels unresolved might be around popularity.

Strictly speaking, Caroline is on the familiar side. The name ranks in the US Top 100. That’s not Amelia or Sophia – or James, all of which appear in the US Top Ten. My guess is that your Caroline will eventually share her name, even if it doesn’t happen until high school or college.

Should you welcome a son named James, that will happen much sooner.

That’s not a reason to avoid a common name – not at all! – but it leaves me wondering how much you’ve appreciated Caroline’s one-of-one status?

If only because there are plenty of traditional names that fall on the even less common side – and thus, increase the odds that your kiddo will never have to share.

I’ll mix a bunch together in this list. If you end up torn between two of them, it might be that choosing the more familiar – or less common! – one could be a good tie-breaker.

A SISTER FOR CAROLINE

Like Caroline, storybook Alice ranks in the current US Top 100. (Caroline stands at #61 as of 2019.) It’s spare and straightforward, a complete name with plenty of history.

If you don’t mind a repeated initial, Caroline and Cecilia sound quite charming together. Like Caroline, Cecilia is easily shortened – but wouldn’t have to be.

On paper, Dorothy feels far less familiar than Caroline. But it has the same long-established history, and they sound just right together.

As tailored as Caroline, vintage Esther is a name with plenty of strength.

Some might find Laura slightly dated – it was a smash hit in the 1960s and 70s. But it’s truly a classic choice; a name, like Caroline, that everyone knows but no one is using.

Always a middle, but seldom a first! Marie is elegant and charming when promoted to given name status – which doesn’t happen nearly enough.

Any of the Rose names could be a great option, but Rosemary seems like a great balance to Caroline.

Tailored and lively, Vivian and Caroline would make a great pair.

I’ll admit, I’m hooked on the idea of Caroline and Cecilia. They’re both C names, and traditional, feminine ones, too. But they don’t share the same starting sound at all. And while nicknames abound for both names, there’s no need to shorten either. (My hunch is that most Carolines and Cecilias don’t use nicknames.)

But if two C names is just too much, I wonder if Dorothy would appeal? It’s different, in the sense that it’s relatively underused. But everyone recognizes it and it’s easily spelled and pronounced. I think it satisfies your criteria exactly.

Readers, what would you name a sister for Caroline?