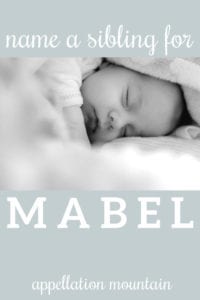 I’m hoping you might have some suggestions. I’m pregnant with baby number two due in December. We have a daughter, 22 months, named Mabel.

We were using the name Mabel for about five years before she was born, so couldn’t imaging another name for her.

However this time round we are struggling for boy and girl names. I don’t want a name in the Top 100 – as a Jessica born in the late ’80s I was never the only Jessica in the classroom!

I like vintage with a bit of sass. A boy name that we are toying with is Chester. I also like Etta for a girl. Nothing is really something we love though.

Congrats on your new baby!

When you’ve known your first child’s name forever, it can feel impossible to think of a name for her sibling. But the good news is that you have a good idea of what you’d like. It’s just a question of accelerating the process. We can help with that!

So, we need boy and girl name ideas. They need to be:

And, of course, they need to be a good match for Mabel. This makes me think we’re looking for tailored, nickname-proof girl names, rather than something more elaborate.

A SISTER FOR MABEL

Daphne – At #383, Daphne feels familiar, but not common. And it’s a spirited name that’s not tied to any era. (Though this Django Reinhardt piece sounds like the names you’re describing – and it’s called Daphne!)

Dorothy – Dorothy Gale went over the rainbow in 1939. By 1985, Dorothy Zbornak was retired in Miami. But today, it has come full circle, and feels like an adventurous girl’s name again. It currently ranks #586.

Louise – Louise Brooks stamps this name as effortlessly vintage, but Louise also feels like a classic. It ranks #800.

Ruth – In some ways, Ruth is serious – an Old Testament figure, a Supreme Court Justice. But on a girl, it’s sparky Ruthie – and that’s a name that feels perfectly paired with Mabel. It ranks #265.

Simone – Simone might feel sleek and sophisticated next to friendly Mabel, but I think the names share a tailored style that’s quite compatible. It ranks #733.

Vera – A vintage name that’s on the upswing, but, at #257, remains far behind Ruby or Stella.

A BROTHER FOR MABEL

Archie – As approachable as Mabel, and every bit as vintage, too.

Calvin – Another throwback name that, like Mabel, feels quite current today.

Dexter – If Chester is close, but not quite, how about Dexter?

Felix – It’s tough to beat the meaning of this name: lucky.

Hugo – Arlo, Leo, and Milo are quite stylish. Hugo shares the same ‘o’ ending, but isn’t nearly as popular.

Otis – Originally a surname form of Otto, Otis and Mabel feel like they’re from the same era.

Philip – Maybe a little more buttoned-up than Mabel, but both names are downright fun to say.

Rufus – An ancient Roman name mentioned in the New Testament, Rufus has been out-of-favor in the US for years … but that might make this the perfect choice.

Overall, I love the idea of Archie with Mabel, but I wonder if Archie feels like it needs a formal name? I’ve been toying with Arthur called Archie, but that might be a stretch. Still, I think just Archie works well.

If not Archie, then how about Dexter? Yes, there’s the serial killer. But Dexter has that great, vintage appeal, while the X makes Dex a thoroughly modern nickname.

Back to girls’ names: Etta is great, but I like Edith just a little bit more. I think Mabel and Edith both benefit from strong, bright vowel sounds. Plus, they’re feminine without being frilly, traditional without being too expected, and nickname-proof, but with great built-in nicknames: Edie and Mae.

Readers, over to you: what would you name Mabel’s sister or brother?