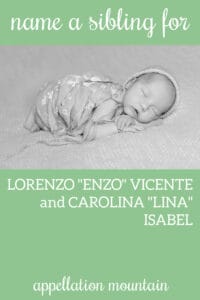 Name Help is a series at Appellation Mountain. Every week, one reader’s name questions will be discussed. We’re relying on thoughtful comments from the community to help expectant parents narrow down their name decisions.

Thank you in advance for sharing your insight!

I’m pregnant with baby number three. This is the first time we’re Team Green so we have the additional challenge of needing both a boy and a girl name. We easily decided the names of our previous children but this one has us totally stumped!

Our son is Lorenzo “Enzo” Vicente and our daughter is Carolina “Lina” Isabel.

We love our kids’ names and are having a hard time finding one that we love as much for this baby.

We’d want the names to:

Our last name is 7 letters ending in -arro.

Also a confession: I love this style. Old European royalty puts a just slightly extravagant spin on the classics. It also reminds us that lots of names are familiar in a great many languages, except English – and that’s always a delight, too.

Still, I can see the one complication: you have to love the formal name and the nickname, plus you have to match TWICE. Lots of names were ruled out, I’m sure, because it fits perfectly with the formal versions, but the nickname conflicts … or vice versa.

Does it go without saying that my first thought was Rafael? Too bad it’s taken! Likewise, Alvaro and Mariana were ones the leapt to mind.

Let’s think of some more options.

A BROTHER FOR LORENZO and CAROLINA

August is fairly common; Augustine and Agustin, much less so. I think it’s the longer versions that feel like matches for Lorenzo and Carolina. Gus is the obvious nickname in English, but I’m not sure about Spanish. In Italian, Dino is sometimes used for Agostino.

This name appears across Europe – it’s Cajetan and Gaetano and Gaetan, too. It’s from an ancient Roman name meaning “from Caieta,” a town in Italy. Cayetano is the Spanish form. I’d probably shorten it to Kai, but I’m sure there are other options.

Another name that immediately came to mind, Ferdinand is regal and storied. Fernando feels just a little more accessible. (Plus it has an ABBA song built-in!) Nando and Ferdy are the go-to nicknames.

Is this too much like your own name? It’s an impeccable classic by way of Spain, and the nicknames are plentiful. Would Chico be too cute, though? I think there are other options, even if they’re less traditional, like Cisco that would work, too – and maybe provide some distance between his name and your own.

I hesitated to include Javier, because I suspect it feels too common. And yet … if you like Alvi, wouldn’t Javi be just as appealing?

Again, Julian ranks in the US Top 50 at the moment. But somehow, I don’t think it feels that popular. The nickname Lian is probably way too close to Lina, but I love Jules with Enzo and Lina.

Is it too close to Lorenzo? I think it’s such a great, underused gem that I’m adding it to the list anyhow.

This is a big name, quite the grand choice. And yet, it shortens nicely to Max and Maxi. I think it’s the perfect brother name for Lorenzo, especially because Enzo, Lina, and Maxi are so perfectly balanced.

A SISTER FOR LORENZO and CAROLINA

Amelia and Emilia are chart-toppers, but Amalia is under-the-radar, a more European cousin to the American favorites. There’s also Emelina, but I think Amalia might be the strong choice. It can share nicknames with Amelia, too, opening the door to Mimi or Mila.

Bianca is Italian, rather than Spanish, but crossover between romance language names is common. (And the Spanish form, Blanca, seems a little less dramatic – though certainly storied.) Plus, the nickname Bebe works beautifully.

Obscure and unexpected, Casilda is the patron saint of Toledo, Spain; she lived during the eleventh century.

Leonor is the Spanish form, but Eleanora or Eleonora feel more similar to your older kids’ names. Nicknames like Ella, Elly, and Nora might be too popular to consider, but you might borrow any of these Eleanor nicknames.

Luis and Luisa are mainstays amongst aristocratic families in Spain; I think Luisa feels like the less-expected choice. It’s also rich with nicknames, like Lulu, Luli, and Lula.

A nicely European spin on Magdalene, which ultimately became Madeline in English, Magdalena would be perfect. Except … is there another nickname besides Lena/Leni? Maggie is an obvious alternative, but Magdalena and Carolina would still share an ending sound.

Yes, Tatiana is Slavic. But it’s a big name amongst Russian royals and plenty of other European houses, too. Tania/Tanya is the go-to short form.

A venerable classic, Teodora is the rare, romance language feminine form of chart-topping Theodore. It’s easily shortened, too. Tea sounds like the Spanish word for aunt, but maybe it’s different enough? If not, options abound. I’d consider Tess, if it’s not too American with Enzo and Lina.

I’m not sure I have a clear favorite, but if I have to pick, I’ll say Maximiliano and Luisa, if only because I think Maxi/Max and Luli are such great nicknames.

Readers, over to you! What would you name a sibling for Lorenzo “Enzo” Vicente and Carolina “Lina” Isabel?