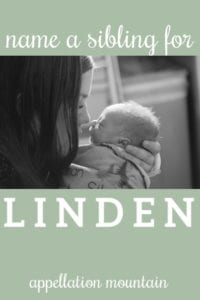 I’m 37 weeks and still undecided! Our sons name is Linden, and we love his name Linden. It’s an actual name, easy to spell, easy to pronounce, and fairly uncommon

His middle name is an unusual two-syllable Irish surname and family name. Our last name sounds like Castle with an R at the end.

We don’t know gender with this baby. The front runner for a boy is Ellis Jon.

The front runner for a girl is Collins Elizabeth. Or we could use Ellis for a girl but I don’t like Ellis Elizabeth so we’d have to find another middle name.

I’m a little less sure about Collins. I can’t decide it it’s classic (preference) or a bit too trendy sounding.

My husband is against -er ending names because of our last name. He thinks the -er and -er sounds harsh. But I don’t necessarily think it’s terrible! I love surname names and like something a bit more masculine for girls. We like uncommon names but not weird or hard to pronounce/spell.

Any help from you or your readers would be greatly appreciated!

I think Ellis is perfect for a son. It’s more popular than Linden, but far from common.

I don’t think you have to look any further.

But a girls’ name does present some challenges!

A SISTER FOR LINDEN

Here’s the thing about surname names for girls: in certain circles, especially in the American South, parents have handed down family surnames to their children – often without regard to gender – for generations.

But surname names for girls that aren’t attached to a family tree? That’s mostly a new idea, though a few outliers, like Shirley, can be found.

The wave of girls named Taylor, Kelly, and Jordan came in the 90s, followed by Madison and Mackenzie, and then Harper, Emery, Avery, and Kennedy.

It doesn’t make the names trendy, exactly. But it does mean there’s not really a group of classic surname names for girls.

This is probably good news.

It means that you don’t have to worry about whether Collins qualifies as a classic. It’s not … but that doesn’t automatically mean it’s a fleeting trend, either. Because – truly – if you’re after a classic name for a daughter, then you’re going to name her Elizabeth. Or Katherine or Margaret or Jane. And that’s not what you want.

Collins is easy to spell and pronounce, and sounds like a sibling for Linden. I think it works beautifully, but if you want to consider more surname names for girls that fall outside of the current US Top 1000, let’s make a list.

Adair – I suggest it all the time, but Adair remains rare. Yes, it ends with R … but the rhythm works. Adair Carter, Adair Hunter, Adair Castle+r.

Bellamy – It’s unisex, but the first syllable makes it particularly appealing for a daughter.

Ellery – Midway between Ellis and Emily, Ellery is rare but very wearable. The only hitch: it rules out Ellis for a future son.

Marlowe – Marlo is a mid-century girls’ name, but Marlowe feels like a modern surname choice.

Quinlan – Quinn is popular for girls, but Quinlan takes it in an unexpected direction.

Reeve – File Reeve somewhere between Reese and Eve – a name no one is using, but would wear very well.

Yardley – Yardley fits with so many feminine favorites, from Ashley to Hailey to Everly. But it’s different and distinctive, too.

Overall, I love the sound of Reeve Elizabeth Castle-with-an-r. I think it’s exactly right with Linden. And, as a bonus, the writer Reeve Morrow Lindbergh, daughter of famed aviator Charles and writer Anne Morrow Lindbergh, makes it feel just slightly familiar for a girl.

But I also think it’s worth pondering Ellis for a daughter. One the downside, Ellie names are everywhere for girls, from Ella to Ellison to, well, Eleanor and Elizabeth.

On the other hand, Ellis itself is not especially popular.

And if Elizabeth isn’t a significant family middle name, then lots of classic choices would work beautifully with Ellis. I love Ellis Katherine Castle-with-an-R, but the list is long.

So I think Collins works, and Ellis and Reeve are both solid options to consider if Collins feels not quite right.

Let’s turn it over to the readers: What would you name a sibling for Linden?