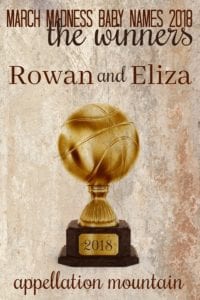 March Madness baby names 2018 has drawn to a close, and it’s time to announce the winners.

Please join me in congratulating Rowan and Eliza, the newest members of our March Madness baby names’ champions circle.

The final match-ups were plenty exciting:

I make it a point to close voting without looking at the results every week. So while I usually have a sense of how things are going on Tuesday or Wednesday, I’m never certain what’s going to happen when I finally click the “close poll” button. This was the most exciting contest we’ve had so far!

Speaking of the past:

Rowan and Eliza join past winners:

You’ll note that Cora defended the title in 2015; after that happened, all past March Madness baby name champions were disqualified from future contests.

As a reader commented, it’s interesting how every year’s winning pair sounds like they could be siblings – or even twins! In fact, there’s something similar about the entire list. Top 100 names don’t make it, but then, neither do the really out-there picks, like Endeavour and Phryne, that always appear in the opening rounds.

Sorry that March Madness is ending? I’m planning an overview of the winners next month, along with a chance to vote on your favorite of all the favorites.

In October, it’s time for the second edition of the Great Halloween Baby Names Contest. (Check out the 2017 results here.)

And, of course, next March, we’ll be back with another round of March Madness Baby Names.

Thanks for each and every vote! Did your favorite win?