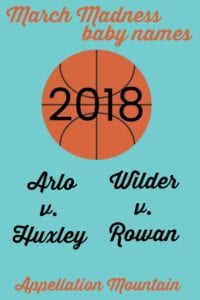 March Madness baby names 2018 rolls into the boys SemiFinals round!

Some years we have crazy close matches, with only a few votes separating one name from another. But this year? So far, nearly every contest has had a clear winner. Even the ones that I thought would be most difficult seem to be delivering a clear and unambiguous victory.

Maybe that’s why I can’t even hazard a guess as to the ultimate winner of March Madness baby names 2018 for the boys. I can see any of the SemiFinalists taking home the trophy.

The name that wins will join an elite fraternity of champions, stretching back to our first year in 2011: Nathaniel, Arthur, Archer, Everett, Finn, Theodore, and Leo.

It’s possible, but there’s only one way to know for sure.

Wilder is a preppy hellraiser name, a surname choice that’s both buttoned-up and ready to break free. It’s gone from seldom-heard to rising favorite in just a few short years.

Rowan, on the other hand, has been climbing since the late 1990s. It’s part Irish surname, part nature name pick, and part colorful kid, since it’s ultimately related to Ruadh – red.

That makes this a match-up for the outdoorsy.

These two names just sound cool, but not in a try-hard way. Arlo strikes me as a friendly, homespun name, at home on the farm or in the heart of the city. Huxley feels a little sleeker, more of an urban pick. And yet, they could almost be brothers, too.

I can’t decide which way I want to vote on this one!

Voting will remain open through Thursday, March 22nd. Check back on Saturday, March 24th for the Final Round! And don’t miss the girls’ SemiFinals, coming up later today.