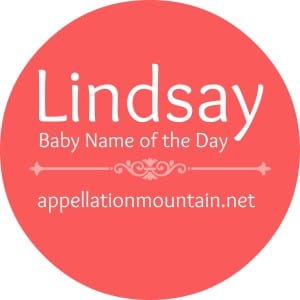 She was a Top 50 favorite for girls in the 1980s – and  even more popular when all of the spellings were tallied up.

80s week continues with Lindsay as our Baby Name of the Day.

Chances are that you know a Lindsay, and odds are good that you’ve met a Lindsay who spells her name Lindsey, or even Linsey.

Back in the 600s, there was a Kingdom of Lindesege – Lincoln island.  That’s because it was located in Lincolnshire, island-like in the midst of marshland.  The ‘eg’ is pronounced ‘ey’ – so the place name became Lindsey.  Up until the 1970s, it was still officially on the map in Northern England.

There’s a Scottish Clan Lindsay, with history tracing back to the 1100s.

For years, both spellings were used sparingly for men – think of Fleetwood Mac’s Lindsey Buckingham, among others.

But spellings were fading by the middle of the twentieth century:

Lindsay Wagner.  She was born in 1949, and yes, it is her real name.  Her big break came in 1975 as Jaime, the childhood sweetheart of The Six Million Dollar Man.  She went bionic following a sky-diving accident, starring in The Bionic Woman spin-off from 1976 through 1978.

Starting in 1974, twin sisters Lindsay and Sidney Greenbush were playing Carrie Ingalls on Little House on the Prairie.

Since then, the list of notables – fictional and real – answering to a version of the name is long:

And then there’s child star turned cautionary tale, Lindsay Lohan.  LaLohan may help explain why both spellings of the name have tumbled so far, so fast.  As of 2013, Lindsey ranked #572 and Lindsay a chilly #683.

It strikes me that this one is so far out that it might almost be time to cautiously consider reviving Lindsay as a boys’ name.  For girls, Lena or even Linley feels fresher in 2014.

Do you know any Lindsays?  Can you imagine this name making a comeback anytime soon?  Will Lindsay/Lindsey ever be used for boys again?