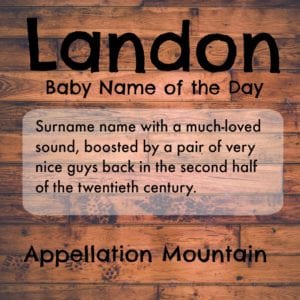 It’s a popular surname name boosted by a pair of Very Nice Guys in the second half of the twentieth century.

Thanks to Alli for suggesting Landon as our Baby Name of the Day.

There’s more than one possible origin for this surname:

Like many surnames, it saw some use as a given name over the years. But it took a famous actor to make this one really take off. Eugene Maurice Orowitz was born in Queens back in 1936. When it came time to choose a stage name, it’s said that young Eugene paged through a phone book.

Lots of small roles led to a star-making turn in the wildly popular television Western Bonanza, which ran from 1959 through 1973. Michael played youngest son, Little Joe, in the series.

Not long after Bonanza ended, Michael was back on the small screen as Charles Ingalls – Laura’s beloved Pa – in Little House on the Prairie, another long-running favorite. The original Little House aired from 1974 through 1983.

Michael’s last series was also successful: Highway to Heaven, in which he starred from 1984 through 1989.

It wasn’t just the popular actor that boosted the name. Irish surname name Brandon rose at the same time, reaching the US Top 100 by 1971. By the 1990s, Brandon was a Top Ten favorite.

Logan came along later, but followed the same curve up, up, up.

For decades, parents were all about two-syllable, ends-in-n surname-style names for boys, and Landon just plain fit.

Novelist Nicholas Sparks’ A Walk to Remember told the story of Landon Carter, growing up in the late 1950s in a small North Carolina town. He’s the son of the local Congressman, a popular high school senior. Against the odds, young Mr. Carter ends up falling for the Jamie Sullivan, the shy minister’s daughter. It’s a sweet romance. Except this is Nicholas Sparks, so you know heartbreak is coming. I’ll spare you the spoilers, but let’s just say it’s a modern-day take on Love Story, the bestseller-turned-blockbuster that catapulted Jennifer to the #1 spot.

A Walk to Remember has a movie version, too. Mandy Moore played Jamie, opposite Shane West as the romantic hero, in the 2002 film.

It’s probably time for this leading man to leave the spotlight, along with many other two-syllable, ends-in-n names. But it’s impossible to argue that Landon was anything other than a success – an obscure surname that became familiar in households all across the US.

What do you think of Landon? Is this name a modern classic, or a trendy choice that will fade quickly?