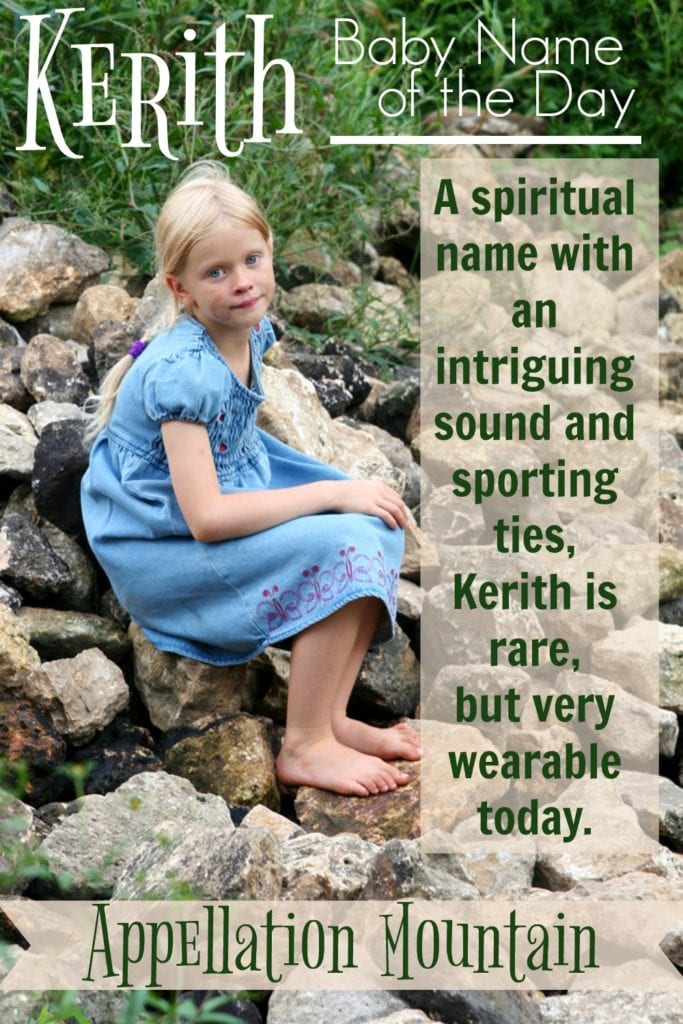 Kerith belongs with the true rarities, a name with a fascinating story to tell.

Our Baby Name of the Day was inspired by journalist Kerith Burke.

Visit Iceland, and you’ll find a volcanic crater lake called Kerið. The name might be Anglicized to Kerith or Kerid. I couldn’t find a word about the name’s origin. It seems too obscure to have inspired many parents, and yet it could explain a few.

Instead, most bearers of the name probably owe it to the Bible. Specifically, 1 Kings 17. It tells that Elijah prophesied that there would be a drought to punish the unfaithful. God helps Elijah survive by hiding in Kerith Ravine.

Elijah lived; the guilty repented; and, after much suffering, the drought ended.

While any name mentioned in the Bible is likely to see some use, this is fairly obscure. Irish novelist George Moore gets credit for raising the name’s profile in the twentieth century. He penned The Brook Kerith in 1916, imagining if Christ had not died on the cross, but instead was nursed back to health.

The idea stirred up controversy aplenty, and while writers have tangled with similar themes since, it was also relatively novel for 1916. Certainly, it may have helped bring the name into greater familiarity.

Kerith: By the Numbers

Moore’s novel did not, however, inspire parents to name their daughters Kerith.

It wasn’t until 1967 that 12 girls received the name. In 1968, the number rose to 20. The name appears steadily in the Social Security statistics afterwards, given to a few girls every year through 1983. It fades after that year. Five girls were named Kerith in 2006, and five more in 2011. But the numbers have stayed low in recent years.

I found a few churches by the name, which appear to be more recent in their establishment, so perhaps there’s a spiritual use I’ve missed.

Of course, the 1960s saw Karen reach the US Top Ten. Carol and Carolyn remained Top 100 choices. And Kerry and Kerri rose rapidly for girls in the era.

Perhaps the name simply fit with all the other Kar/Ker/Car choices in favor.

Plenty of women with the name can be found through a Google search, but Ms. Burke has become the most prominent.

The sports journalist has covered the New York Mets, along with her alma mater, the University of Connecticut. Burke played basketball for the UConn Huskies. Most recently, she covered the 2016 Olympic games in Rio.

And yet, Ms. Burke’s fame falls short of what’s required to make this rarity more common.

The name is likely to remain distinctive – rarer now that it was in twentieth century! But it could appeal to many parents.

Overall, if you love your baby names rare, tailored, and spiritual, this is one to consider.

Would you consider Kerith for a daughter?