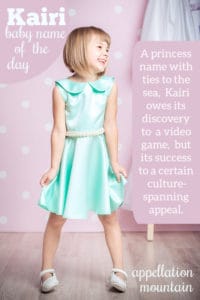 Kairi could be the latest Disney princess name to appeal to parents – but it doesn’t come from the big screen.

The 2019 Gerber baby inspired our Baby Name of the Day.

In 2002, video game Kingdom Hearts was introduced for the PlayStation2 in Japan.

A collaboration between Disney and Square, it mashed up characters like Donald Duck with those from the Final Fantasy video game series.

It hit it big, becoming a best-seller and making greatest video game of all-time lists.

Since then, thirteen games total have been released in the series, and it’s still going strong. Comics and other spin-offs have followed. Over two decades, an awful lot of people have heard the character names.

Kairi appears from the very first. She’s BFFs with Sora and Riku, and they all live together on Destiny Islands. In various editions, she’s been seen as a small child and a teenager.

She’s one of seven Princesses of Heart, but it’s not all ballgowns and handsome princes. Her status leads her to exile as a child, having her heart stolen as a teenager, and kidnapping, to name just a few calamities. But she trains as a fighter, too, and ultimately takes revenge on at least one of the bad guys. (Or so say the various synopses; I’ve never played the game and I’m trying to avoid spoilers.)

So what does Kairi mean?

The game’s creators have indicated that it comes from kai – sea, in Japanese. (Though depending on the kanji used, other meanings are possible.) But this will resonate with American parents, who may know that fast-rising Hawaiian name Kai means sea, too.

This also gives a clue to pronunciation. It’s not kay-ree. It’s ky-ree.

In Japanese, ky-ree sounds like a phrase meaning nautical mile.

I’ve also seen sources suggesting it’s Estonian. Maybe. I found Kaira listed as a Lativan name meaning passionate. But while the two countries share a border, the languages claim different roots. (Estonian comes from the same language group as Finnish; Latvian is a closer cousin to Slavic languages.) Still, it seems to be in use prior to the game’s release.

Others list it as French. Maybe so, but I don’t see a separate French source for the name, besides Kingdom Hearts.

One last guess: it might evolve from Katherine. Kaia did, and so did Katri in Finnish and even Kari in some places.

You may also see it in use for boys.

This almost certainly reflects the popularity of Kyree and Kyrie. That last one looks like kyrie eleison – Lord, have mercy, pronounced with three syllables: KEE ri ay.

Instead, Kyree and company come out of a 1990s set of mix-and-match sounds for boys’ names: Tyree was big in the mid-90s; Kyree and Kyrie followed. Basketball player Kyrie Irving, born in 1992 and currently with the Boston Celtics, has pushed the latter spelling into greater use for boys. It’s pronounced just like Kairi.

But credit for success as a girls’ given name goes to Kingdom Hearts. The game debuted in 2002 in the US. It took until 2010 for Kairi to tip into the Top 1000, but it gained steadily in use during the intervening eight years, going from unheard to mainstream.

A new Gerber baby, the first of Hmong descent, answers to the name. (She’s crazy adorable.)

Just like many parents naming their daughters Madison never connected it to Splash, Kairi has shed its video game roots to become a mainstream possibility.

The downsides? I suspect it’s often confused for Carrie. Then again, like Kali and Kiri look like nicknames, but come with complex backstories of their own. The same is true for Kairi. And a little bit of correction would surely do the trick.

If you’re after a subtle nature-leaning name with a healthy dose of 21st century sensibility, Kairi makes a surprising possibility.

What do you think of Kairi? Would you consider it for a daughter? 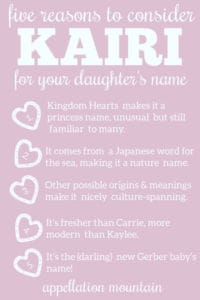