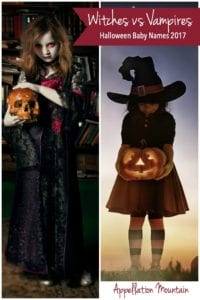 Time for Halloween Baby Names 2017 SemiFinals! The showdown continues, with just two witch names and two vampire names advancing, all vying for the chance to represent their fellow mythical creatures in next weekend’s final showdown.

Turning to the vampires:

It strikes me that we name witches and vampires differently. Witch names signal wisdom. They tend towards the vintage, the quirky, the out-of-step. Vampire names feel a little sleeker, more elegant, international. Few of the witch names fit on the vampire list, and vice versa.

There’s a very different vibe to our two witch names semi-finalists, but either one could win the title of most popular witch name this year.

Vote for your favorites, and come back next week for the ultimate Witches v. Vampires Halloween-inspired baby names face-off.