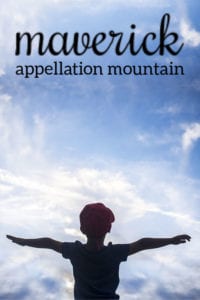 Maverick has gone from cowboy cool to flyboy to Top 100 favorite.

Inspired by the 2020 Top Gun sequel, it’s our Baby Name of the Day.

Cruise played a daredevil, a wildly talented risk-taker with a need for speed. The action movie included plenty of drama, a soaring soundtrack, and a happy (enough) ending. Can’t remember the movie? Kenny Loggins’ soundtrack song “Danger Zone” has the highlights, Ray-Bans and all.

As with any film so successful, it stayed in the public eye thanks to subsequent releases of the DVD, anniversary collections, and years upon years of rumored sequels.

Long before Cruise put on that bomber jacket, ABC gave us the first pop culture use of the name. In the 1950s, the small screen Maverick introduced us to a family of cool-headed gamblers, reluctant heroes of the Wild West.

Bret, Bart, Beau, and Brent all shared the surname Maverick between the years 1957 and 1962.

The name inched up slowly following Top Gun’s 1986 release. And then, in 1994, the character of Bret Maverick was re-booted in a big screen movie starring Mel Gibson.

The combination finally tipped the name back into the US Top 1000 in 1994.

Besides a surname of famous fictional characters, there’s a very real Texas rancher named Samuel A. Maverick. His claim to fame? He opted to leave his calves unbranded. It’s not entirely clear why, but his surname became synonymous with someone who acts independently. Maybe stubbornly so.

The surname’s origins are lost to time, but Sam’s family wasn’t the first. Another Samuel Maverick died in the Boston Massacre in 1770.

The name is shared with an NBA franchise, Ford vehicles, cigarettes, shotguns, and at least one roller coaster.

It is also a missile.

Therein lies the challenge. We perceive independent, free-thinking, and tough as positive qualities. After all, Tom Cruise ends Top Gun a hero. Yet there’s a bit of danger in the meaning, too. It hints at an appetite for risk beyond what might be considered wise.

There are plenty of reasons to see Maverick as a stands-out/fits-in choice, too:

Now that the name has reached the US Top 100, odds are that we’ll hear it differently. We’re used to certain noun names of long use. No one expects Grace to be a ballerina. Violet and River blend in with Bella and Hunter.

In 2018, just over 5,000 boys received the name. That means you’re more likely to meet a newborn Maverick than an Edward or Peter, a Griffin or a Beckett.

If you’re all about bold boy names, this might be the best of both worlds. There’s no question the image and meaning feel big, but as it becomes familiar, it’s easier to wear.

Maybe the only question is just how many new baby Mavericks will meet once the Top Gun sequel hits theaters this summer.

First published on January 27, 2008, the first version of this post was titled “Don’t Go There: Maverick.”  I planned to talk about names parents should never consider for their children. Over time, I realized I was wrong at best; snobbish and cruel at worst. I updated the post most recently on January 7, 2013, and again on January 29, 2020. I hope this post now reflects this name’s deserved status as a mainstream favorite. And I hope the revisions indicate that I can change my mind – and be honest when I’ve been wrong. Oh, and, I hope it reminds us all that style changes, constantly, and today’s Hildegarde is tomorrow’s Abigail. And vice versa. 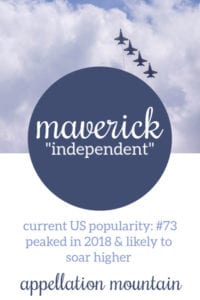