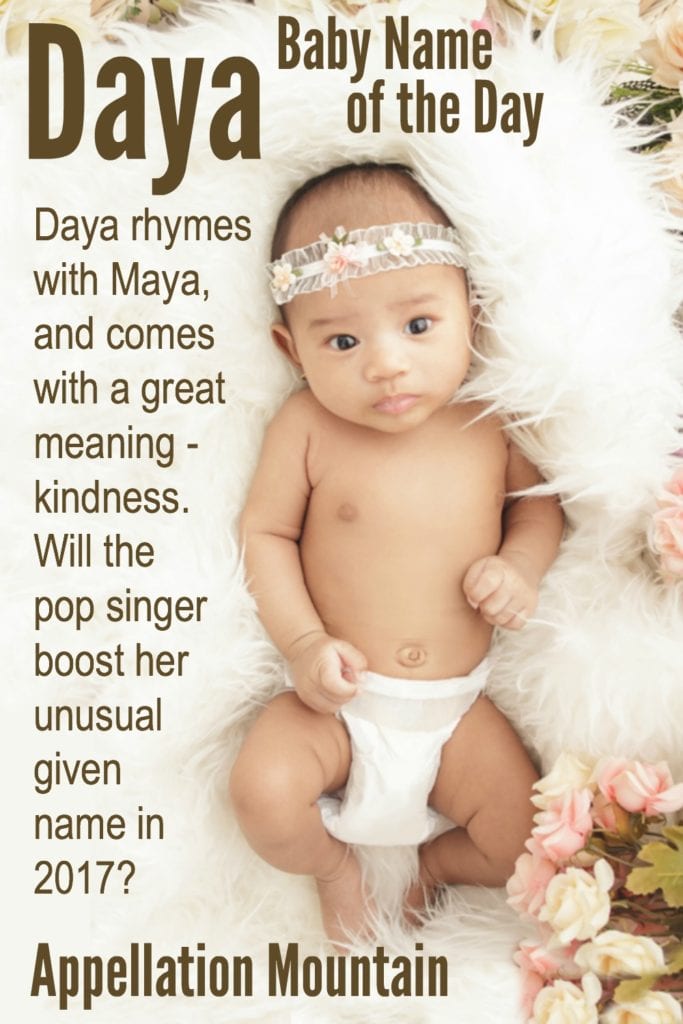 Daya rhymes with Maya, a Top 100 favorite for more than a dozen years.

Our Baby Name of the Day is inspired by the young pop singer who scored some serious hits in 2016.

Music is nothing new for Tandon, however. She took her first piano lesson at the age of three, and eventually learned saxophone, flute, and guitar, too.

The newcomer has already been nominated for her first Grammy.

So where did she find her unusual mononym?

But this name goes beyond simple virtue names like Faith and True.

Followers of the Sikh religion consider it a fundamental teaching, along with truth, contentment, humility, and love.

The concept exists in Hinduism, too. Different types of compassion are explained. Daya, in particular, represents the desire to relieve the sorrow and troubles of others.

The other types of compassion include anukampa and karuna. Karuna, you might recall, is the middle name of actress Uma Thurman. Her father, Robert Thurman, a professor of Buddhist Studies, chose her unusual names.

Daya appears as a given name in many parts of the world – almost always for men. I found a nineteenth century Urdu poet, a twentieth century Indian philosopher, along with government officials, actors, and other notables from the last few centuries.

Perhaps that’s not a complete picture, though. I found a few cases where Daya is used as a woman’s name. In 1998, a Malayalam-language movie featured a female lead by the name. Daya rebooted traditional stories from One Thousand and One Nights. It reinvented Aladdin as a young woman rather than a man, while keeping the same historical setting. The movie won several Indian film awards.

On the other hand, Orange is the New Black has become a staple. It boosted the name of main character Piper, and may be lifting other names, too.

Dayanara Diaz answers to the nickname Daya. Her pregnancy becomes a major plot point during the first season, and she remains a central character right through the fourth season. With three more seasons in the works, the character’s adventures show no signs of ending.

Daya: By the Numbers

The rise of Maya led a few more parents to discover this rhyming name. By the early 2000s, around twenty girls received the name every year.

With the singer becoming better known, and the television series remaining a fan favorite, it’s easy to imagine more parents hearing this name. Thanks to a great meaning and its similarity to Maya, odds are that it will appeal to many parents.

That said, 42 births in a single year remains well under the radar – and this name could just as easily fizzle before it catches on.

What do you think of Daya? Would you consider this name? Do you think it will catch on?