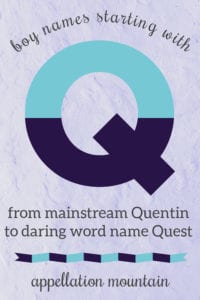 Boy names starting with Q range from the time-tested Quincy to the imaginative Quest.

And yet, maybe this letter feels a little challenging right now. Not so long ago, Q might’ve been effortlessly cool, a middle initial that could spark up a conventional name. It suggested James Bond’s inventive Quartermaster, the wizard of spy gadgetry.

But now, as the letter Q seems intertwined with conspiracy theories, maybe it feels a little different?

Despite the headlines, though, Q names for boys remain a small but attractive bunch. It’s one of the rarest initials, ranked 25th out of 26.

Many of these might be perfect for a fifth child, or maybe a son born in May, the fifth month.

And so let’s look at boy names starting with Q, from Top 1000 favorites to rarities that might be new to you.

A Top 100 favorite for girls, Quinn also remains steadily popular for boys. The Irish surname fits right in Finn and other brisk, brief names for our boys.

The Roman name Quintinius powers quite a few of the Q boy names, including Quentin. It means fifth. Filmmaker Quentin Tarantino makes this spelling most familiar.

Another Quintinius-inspired name, or possibly a surname borrowed from a place called “Queen’s Town.” Likely a little bit of both!

A mythological creature from East Asian culture, also called a qilin or a kirin. This spelling is familiar thanks to actor Terrence Howard. He and Mira Pak named their son Qirin Love in 2015.

With multiple origins and meanings, Quade seems familiar and different all at once. We probably know it best as McQuade or McQuaid, a surname with Irish roots.

Another name for a wharf, it looks like kay … but it’s pronounced key. It’s from a Middle English word for a dock where boat passengers disembark or cargo is unloaded.

Another word for an adventure, with a meaningful vibe. It also feels like a nod to 1990s hip hop innovators A Tribe Called Quest.

It’s a little literary – think of quill pens – and a little superhero – think of Peter Quill, from Gardens of the Galaxy.

The surname MacQuillan is sometimes related to Hugh, though other origins are possible. Drop the Mac and you’ll arrive at an intriguing Q name for a son.

A tree name, as well as the name of its fruit, imported from Persia and Greece.

Another Irish surname with multiple origins and an appealing sound.

Back to the Quintinius names! Quintilio is simply the form favored in several romance languages.

A Quinn-Antonio mash-up that brings to mind rarities like Quintilio.

A slimmed down version of Quintinius, meaning simply five.

It looks like Qirin-with-a-n, but Quirin comes from Quirinus, meaning spear. It’s also the name of an ancient Roman god and several saints.

What are your favorite boys names starting with Q? What would you add to this list? 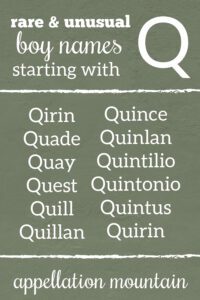 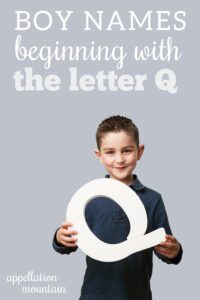