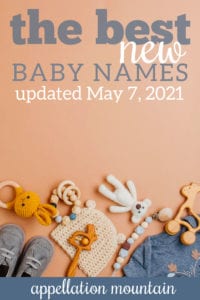 These are my choices for the best new baby names 2021.

Wading through those lists, a few things stand out. Many of the names are technically new, but they’ve really been teetering on the edge of the Top 1000 for a few years. Sometimes they might be on the way up. Other names linger on the fringes for years.

And many simply represent a slight twist on a current favorite – a spelling change or even a related name. Cillian followed Killian; Melani picks up on Melanie and Leilani, too.

So the names that I’m looking for represent something different. They’re distinctive names, separate from others already ranked. And while they often pick up on stylish sounds and other trends, they don’t sound too much like anything previously on the list.

I limit my choices to eight names for boys and eight for girls. both because it forces me to really think and because this list is the basis of our July New Names Showdown.

What’s that, you ask? It’s a contest that lets you vote for your favorite of my favorites. The winners claim the titles of Best New Names of 2021.

More on that later. For now, here are my picks for the best new baby names 2021.

It’s easy to dismiss invented names. And yet, sometimes they just plain work, like this David-Julian/Adrian mash-up.

Polished surname name Everett is a Top 100 favorite. Cross it with the world’s tallest mountain, and Everest is an on-trend name that signals achievement.

An effortlessly cool name, Jones picks up on our love of -s ending names like Miles. But it also benefits from everyguy nickname option Joe.

Technically Leif rhymes with safe. It feels like a study in contrasts – part-Viking name, at home on Asgard. But it’s also close to a gentle nature name, a brother for River.

We love a good surname name, so McCoy fits right in. But there’s a second aspect to this name. We use it to mean authentic – “the real McCoy.” Like Truett, another new boy name, it straddles the line between virtue name and surname style.

Nature names are having a moment, and water names like River and Kai are part of that trend. No surprise, then, that both Ocean and Rio appeared in the US Top 1000 this year. Rio also picks up on our love of boy names ending with o, like Leo and Milo.

Short and sharp, Zev comes from the Hebrew word for wolf. It takes all the high value Scrabble letters of Xavier and smooshes them into a compact, three-letter name with a fierce and independent meaning.

A goddess name, Artemis is instantly familiar and tied to the moon and the hunt. But it’s rare as a given name. Interestingly, it’s also unisex – in this case, thanks to a longer Greek name that meant “gift of Artemis” and reduced back down to Artemas.

A sparky, retro mini name, Etta seems poised to succeed Ella and Emma. The appeal of legendary singer Etta James is a plus.

Holiday movie Elf has become a modern classic. Invented name Jovie – likely borrowed from the word jovial, meaning happy – comes straight out of the quirky film. It fits with current trends, a successor to Ivy and Josie alike.

A demon companion to Lucifer on the television series, Mazikeen’s name is edgy and cool. And while the character has plenty of appeal, it’s not an easy namesake to explain. Still, could it be the next Khaleesi? I’m not sure this fits with the best new baby names of 2021, but I can’t stop thinking about it.

Disney’s Raya and the Last Dragon was delayed to 2021, but the movie generated plenty of buzz in 2020. Raya rhymes with Maya, and it’s the name of a heroine on an epic quest – a winning combination.

A Slavic spin on Zoe, Zoya has been trending in the UK for a few years. It’s a newcomer in the US, though, a short and sweet name that benefits from that appealing letter Z.

ABOUT THE NEW NAMES SHOWDOWN

During the month of July, we’ll vote our way through these names until just one is left in each column.

Do you have any favorites from this list? Any early guesses about which names will win the July showdown? 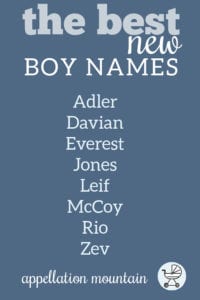 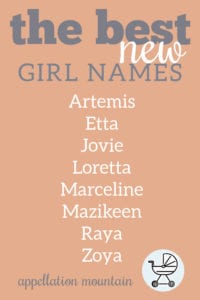