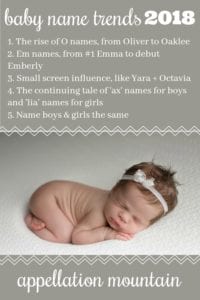 What are the biggest baby names trends 2018?

On May 11th, the US Social Security Administration released the new lists of most popular names given to children born between January 1st and December 31st of 2017.

That means it’s time to look at baby name trends 2018 – the influences that are changing the way we named our children, and will almost certainly continue to impact name choices in the coming years.

If you wanted to choose a white-hot name for a children born last year, chances are it was brought to us by the letter O.

They’re not new, of course. We’ve been naming our kids Owen and Olivia in big numbers for years.

But Octavia and Opal debuted in the girls’ Top 1000. So did Oaklee, Oaklyn, and Oaklynn. Oakley gained for girls and boys alike.

Speaking of boys, Oliver debuted in the Top Ten. Otto, Omari, and Odin all jumped.

Ophelia has shed her tragic past to rocket up the charts, and Olive continues to climb.

A remains the most popular first letter for girls’ names, and J for boys. But in terms of style? That crown might just go to the letter O.

Future O names that feel like long shots, but might be worth watching? Onyx and Obadiah for boys; Odette and Oriana for girls.

Emma remains the undisputed #1 name for girls. Only a few names have reached this lofty height. Not so long ago, the honor belonged to another Em name, Emily.

While Emily has faded, a new group of girls’ names starting with the letters Em have soared. Emilia cracked the girls’ Top 100. Emberly and Emerald both entered the US Top 1000.

Outside of the Top 1000, we might watch Emiliana, Emberlyn and Emberlynn, and Emme, too.

And while it’s most pronounced on the girls’ side, Em is trending for boys, too. Emerson, Emiliano, Emilio, Emmett, and Emory all gained for boys.

Both actors and the characters they played proved powerfully influential. It’s always been this way, but with an ever-expanding array of channels and choices, it’s easy to miss the influence of a series if you’re not a fan.

Game of Thrones, of course, was well-represented. Emilia owes something to star Emilia Clarke; Aria and Arya and Yara all speak to the show’s ongoing success, too. And yes, Khaleesi jumped over 100 places.

Speaking of Yara, that might have more to do with Black-ish and Grown-ish star Yara Shahidi.

The 100 almost certainly boosted O name Octavia, and might have also helped push Lincoln farther up the charts. (It’s an amazing show for name fans! I watched a few episodes in the name of research, and now I’m hooked!)

Baby Name Trends 2018: The MonoNames of the Moment

There’s almost always a mononame, a set of mix and match sounds that combines to create a nearly infinite set of combinations. We’re still seeing the Aidens and the Kaylees, but there’s a new MonoName on the block.

There’s Top 100 Eliana, plus three other spellings in the current Top 1000. And Aliana ranks, too. It’s close to the Elenas and Alainas, the Lilianas and the Alias and Alinas. It’s not even too far from Ariana and company.

Because many of these names claim independent history and roots, it’s easy to overlook how very similar they are in terms of sound. And they’re longer, too, than the Hailees and Jaydens of a few years ago. But I hear this sound over and over again … and I think it might just be the most powerful set of sounds for naming girls right now.

For boys, I think the long ‘a’ of Aiden and Jayden has faded in favor of the ‘ax’ sound. There’s Axel and Axl and Axton; Braxton; Dax, and Daxton; Jax, Jaxen, Jaxon, Jaxson, Jaxton, Jaxx, and Jaxxon; Max, Maxim, Maximilian, Maximiliano, Maximo, Maximus, Maxton, and Maxwell; and Paxton.

Most of those gained last year; Jaxx and Jaxxon debuted in the US Top 1000.

Honorable mention goes to ‘ash’ names for the boys: Kashton, Dash, Asher, Kash, and Nash all gained; though a few stand-bys, like Cash and Ashton, slipped.

I used to call it the girl penalty. As a name rises in use for our daughters, we dismiss it for our sons. But I think that’s faded – and continues to be less and less of a concern for parents in 2018.

Nova and Khari debuted in the boys’ Top 1000. Rowan, Charlie, River, Emerson, Phoenix, Avery, Frankie, and Kai all rose for boys and girls alike. And Kendall rose for boys, but fell for girls – despite a well-known female reality star by the name.

I still hear parents hesitate if they learn a name they love for their son if popular for girls. But these days? They’re very likely to shrug it off and use the name anyway. And I think the younger the parents, the more this applies.

What are the baby name trends 2018 you’re seeing? 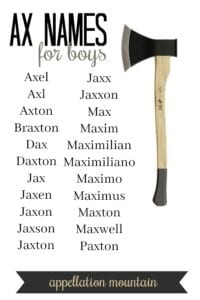