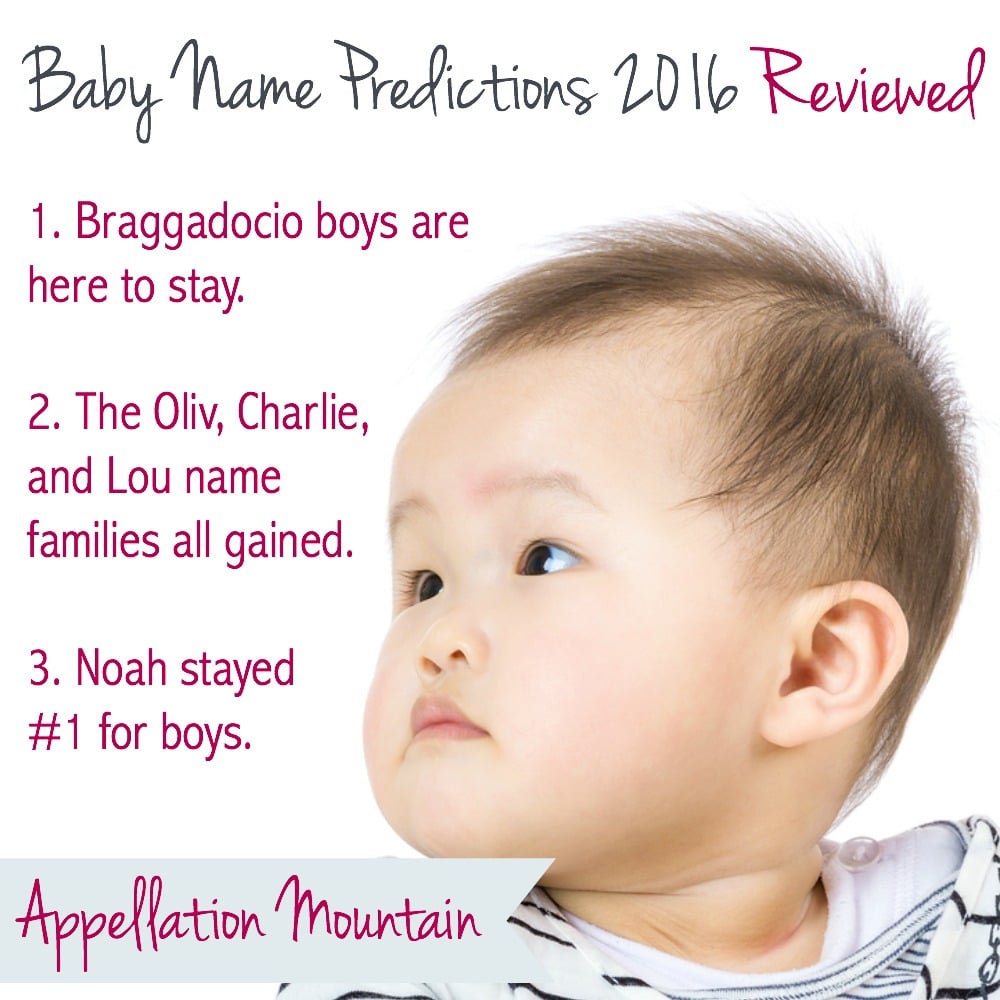 I love trying to guess what will happen next in the world of baby naming. But even more than that, I like checking back to see how well I did.

Some predictions are easy to fact check. Others? Not so much. But I’ll do my best to score my baby names predictions 2016 reviewed with a neutral eye.

There were seven predictions in all.

Let’s start with the hits!

In the original post, I wrote: “They’re not just for Kardashians.” In fact, you could argue that the Kardashians were behind the curve on this trend. Bold, even brash, names like Saint and Reign have been gaining for the last few years.

Baby names with swagger aren’t going anywhere. In fact, Ruger and Thor, Noble, Wilder, and Zeus were all up in 2015. I was wrong about Slade – that name slipped slightly.

Prediction #2: The Olives, the Charlies, and the Lous are the name families on the rise.

It’s not unusual for names to rise in a family, with masculine and feminine forms catching on at the same time, or multiple spellings/versions of a traditional name gaining traction.

There were three families on my list, and every one of them gained.

Prediction #3: Noah will remain #1 for boys.

I think baby name predictions 2016 reviewed is the first time I’ve actually gotten the top name for boys right. No, seriously. I predicted the downfall of Jacob for so long I had to be right eventually, but I was banking on Mason or Liam – not Noah.

This year, though, I got it right. Why? It didn’t seem like there was a clear challenger to Noah. I also wrote: “While it’s definitely changing, parents may still be slightly more conservative when it comes to naming sons. In other words? A name reaching #1 won’t scare them off as quickly.”

I was wrong about Ethan’s departure from the Top Ten, but I was right about James’ staying power – and the fact that it would gain a few places. James was by up 2 in 2015.

Other boy names I mentioned:

Prediction #4: We’re all about WSYIWYG.

The challenge with baby name predictions 2016 reviewed – or any year – is that trends can be tough to isolate and count. I believe that more and more parents favor nickname-proof names for their children.

There are good reasons to go this route, and some of the names that rose sharply in the new rankings are perfect examples. On the girls’ side, Mia, Ava, Mila, Nora, Quinn, Cora, Ellie, Thea, Nova, and Rose strike me as good examples. For the boys, Ezra, Leo, Kai, Beau, Finn, Luca, Levi, Dean, and Theo seem like obvious What You See is What You Get kind of choices.

What’s driving the trend? Our cultural is increasingly informal, from what we wear to how we speak. It’s also database driven. It’s not a huge hassle to explain that you’re Abby, not Abigail. (Or in my case, Abby, not Amy Abigail!) But if I were just Abby, there would never be a need for an explanation. I think that kind of simplicity appeals.

Prediction #5: Comeback boys are brought to us by the letter v.

I predicted that V, rather than X, would be the letter driving unexpected comeback names.

But looking at baby name predictions 2016 reviewed, it’s a muddy picture. Yes, Calvin and Harvey were up, as were Oliver, Maverick, and Everett. But so were Ezra and Axel. Meanwhile, Gavin, Marvin, Vincent, and Alvin were among the v names for boys that fell.

Let’s say that a v can add to the appeal of name – but it’s not so powerful that any name featuring the letter will succeed.

I think this is an important trend, and yet it’s tough to evaluate as part of baby name predictions 2016 reviewed.

We know that parents prefer to avoid duplicating names, and there’s interest in finding something just a little bit different. The result? Names like Rowan, Ronan, Ronin, and Roman are all catching on at the same time.

On the girls’ side, there’s Elena, Eliana, and Alaina and countless other names with a similar sound.

Of course, I’m not sure if this is a sharp departure from years gone by. After all, in the 1920s, Theresa, Teresa, and Therese all rose at the same time. Countless other examples are found over the years.

But what seems new is this: with so many ways to look up names and talk about names, it’s easier than ever to find something just a little bit different. Thanks to the internet, we know that Kaylee is a Top 100 name – but that Zaylee might still seem fresh and new.

Prediction #7: Olivia will be the new #1 name for girls.

Here’s my big miss for baby names predictions 2016 reviewed: Emma held on to the #1 spot, while Olivia also stayed put at #2.

Interestingly, all three names actually fell in terms of raw numbers of newborns given the name. There were nearly 450 fewer girls named Emma in 2015 than 2014, which works out to around a 2% drop. Olivia fell, too, with about a .5% drop in use.

Of course, I should have known it. When I looked at The Rise of a Number One Name, it looked like Olivia had missed its window to reach #1.

On the bright side, I did correctly predict Harper’s rise into the Top Ten, and Madison’s departure, as well as the entrance of Cora and Hazel into the US Top 100.

Schwoo! That was a lot of data to wade through. I think I’d give myself a solid B for this round.  I still have to go back and check all of the names on Trendwatch 2016.