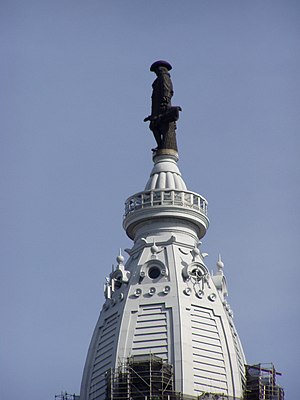 He’s the keystone state, an appealing young actor, and a dark comic genius.

Thanks to Danielle for suggesting Penn as our Baby Name of the Day.

William Penn was the son of an admiral, also named William Penn. But it is the son we in the US remember, thanks to the state that bears his name – Pennsylvania – though technically it is named for his dad.

Penn’s legacy was greater than just a place name. Pennsylvania was established with religious tolerance in mind. The democratic principles he used to structure the colony’s governance would inform the US Constitution. Penn was also known for treating the Native Americans more fairly than was customary for his day. And then there’s Philadelphia, city of brotherly love and cheese steaks. His statue, pictured above, tops City Hall and the Philly skyline.

The Penn family flourished in the new world and a few intriguing names appear on their tree, like Springett and Letitia. But the surname itself has fairly humble roots. It could come from:

Other notable Penns include Oscar-winning actor Sean Penn, as well as his talented family. Actor/White House staffer Kal Penn is another, but he was born Kalpen Modi. Writer Robert Penn Warren’s mom was born Anna Penn, from the Penn family of Virginia.

But there have been two men in recent years who have answered to the first name Penn.

First there’s magician/comic Penn Jillette, one half of the Vegas-headlining duo known as Penn & Teller, and pop to kids called Moxie Crimefighter and Zoltan.

Penn becomes even more appealing to a future generation of parents thanks to actor Penn Badgley, best known as Dan Humphrey on Gossip Girl, and a staple in recent teenage rom coms.

You can also spot Penn on tennis balls – shades of Tom Hanks and the Wilson volley ball in Cast Away.

Formal names that lead to Penn for a boy are harder to come by, but surnames like Pennington, Pernell, and even Spencer could work, but it doesn’t seem necessary. Penn stands nicely on his own.

There’s something dashing about Penn. He’s short, stylish, and has plenty of positive associations – plus he’s never appeared in the US Top 1000. If you’re looking for a Colonial-era rarity that doesn’t come from the Old Testament, Penn is a great option.