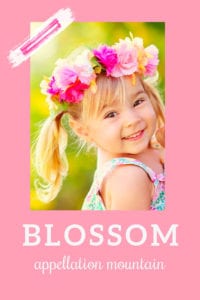 Thanks to Gwen for suggesting our Baby Name of the Day.

Strictly speaking, to blossom means to thrive. It was blotsma in thirteenth century English and blomi in Old Norse.

On first hearing, the baby name Blossom sounds like a late 1960s pick. A hippie chick/love child name, a sister for Rainbow or Karma.

Except nature names trace their history back long before the twentieth century. Flora, after all, is a Roman goddess, and the Victorians perfected the art of adopting nearly every bloom in the garden for a child’s name.

If the 100 year rule applies, this name could be making a comeback right about now.

Of course, that means we can name some famous Blossoms over the years.

Blossom Seeley – born Minnie Guyer – became a major recording star in the 1910s and 20s. An innovator in her day, it seems possible that her popularity drove the name’s spike by the mid-20s.

Actor Blossom Rock – born Edith Marie Blossom MacDonald – also started out in vaudeville in the 1920s. But her biggest role came in the 1960s, as Grandmama on The Addams Family.

But then there’s Blossom Dearie.

You might not recognize the name, but listen to a track or three and her distinctive voice might feel familiar.  Born Margrethe Blossom Dearie, she made her career on the supper club circuit.

It’s said her unusual name came from peach blossoms delivered by a neighbor – or maybe her brothers – on the day she was born.

Odds are that many readers think of a different Blossom first – not Seeley or Rock or Dearie, but the titular character of 90s sitcom Blossom.

The 1990s sitcom world gave us plenty of unforgettable names: Boy Meets World’s Topanga, The Nanny’s Brighton, or too many soap opera characters to count.

But it turns out that the television show offered a backstory for the baby name Blossom. Her brothers answered to the traditional Anthony and Joseph, but their sister? She was named for jazz singer Blossom Dearie. After all, the show was about a single musician dad raising three kids on his own.

The 1990s was also the age of The Powerpuff Girls gave us another television Blossom in the 1990s – a little girl superhero, sister to Buttercup and Bubbles. She’s the confident, determined leader of the trio.

The successful show debuted in 1991 and ran through 1995. There’s a tiny uptick for the baby name Blossom during those years. But only a little – after all, doubling in use only took it up to two dozen or so births.

LILY and ROSE, FLORENCE and MEADOW

And so pan-botanical Blossom, a name with just enough history of use to appeal, seems poised to rise.

If you’re after a bold choice for a daughter, nickname-proof and musical, slightly familiar but immediately surprising, too, then the baby name Blossom might appeal to you.

What do you think of the baby name Blossom? Would you consider it for a daughter? 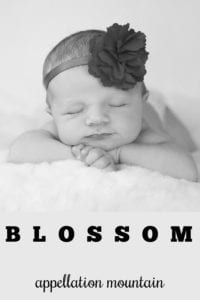