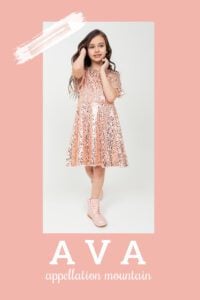 Thanks to Meredith for suggesting our Baby Name of the Day.

Some see the baby name Ava as a variant of Eve.

Maybe that sounds off, but in plenty of languages Eva is pronounced with a long A – just like Ava. Hungarian-born actor Eva Gabor was one among many. (If you know your Disney voices, you’ve heard her as Duchess in The Aristocats and Bianca in The Rescuers.)

But that’s probably not quite right.

Instead, the baby name Ava likely traces its roots to a Germanic element, avi. It likely means desired. The Middle Ages gives us a ninth century Saint Ava, the daughter of a French king and abbess of a convent in Belgium. Others versions of Ava, like Avelina, are found in use, too.

Around the year 1100, the poet Ava of Melk – also known as Frau Ava – composed a series of religious poems. She’s the first named female author in the German language.

The baby name Ava also occurs in Persian, where it means voice. Or so says the internet.

Hawa and Awa are Arabic forms of Eve, so forms of the name are familiar in the Middle East.

And yet, Persian and Arabic are completely separate languages. But they’ve been spoken in the same parts of the world since at least the 800s, so it’s reasonable to think that some cross-pollination has occurred, especially when it comes to given names.

Another possible source for the baby name Ava?

While it doesn’t track with the name’s earliest uses, doubtless this meaning appeals to parents today. Just ask everyone with Wren and Raven on a shortlist right now.

All of this means that the baby name Ava offers history galore.

Even before Ava Gardner struck it big in Hollywood.

(Fun fact: Fred Astaire named his daughter Ava way back in 1942. But celebrity children didn’t occupy the spotlight in that era.)

Back to the future leading lady.

Born in North Carolina way back in 1922, Ava was the youngest of seven kids. Maybe her parents had run out of favorite names by then. The baby name Ava ranked #567 in 1922 – not unknown, but far from common.

Gardner was offered a contract on the strength of her good looks. Her first step in Hollywood was shedding a heavy Southern drawl.

By the 1940s, her career was soaring. During the 1950s, she played a duchess, a baroness, and eventually Queen Guinevere herself. In the 1960s, a later role promoted her to Empress.

Gardner earned an Oscar nomination in 1953.

She also made headlines for her marriage to singer Frank Sinatra. Sinatra left his wife Nancy for Ava. It was her third trip down the aisle. At the time, their relationship was considered scandalous.

But even before the press dubbed Ava a homewrecker, it appeared that the celebrity wouldn’t change the baby name Ava’s use.

During the 1970s, as Ava Gardner’s career wound down, the baby name Ava also fell.

Even if the actor didn’t boost the name, it’s possible that it started to sound like it belonged to another era.

After all, a popular television character in the late 1960s on Family Affair wasn’t enough to revive the name.

The tale of three cute orphans moving in with their man-about-town uncle usually referred to the children as Cissy, Jody, and Buffy, but their formal names were Catherine, Jonathan, and Ava Elizabeth.

But then something started to happen.

Audrey – as in Hepburn – staged a revival. Other names inspired by Hollywood’s Golden Age seemed like potential inspiration. By the year 2010, that included surnames like (Jean) Harlow, too. Choices like Vivian and Greta and Ingrid and Mae might’ve benefited from the same trend, but it was harder to say for certain.

HEATHER and REESE and HUGH

What clearly played a part was a fresh wave of Hollywood newcomers – the children of celebrities.

Many more high profile parents have chosen the name in the years that followed, including Jeremy Renner’s Ava Berlin, born in 2013.

Along the way, it’s worth noting that Smashing Pumpkins’ 1998 single “Ava Adore” lent the name some edge. A Nosferatu-inspired video takes the baby name Ava miles away from glamour and glitz. The name’s rapid rise in the late 1990s and early 2000s suggests that maybe the song and the celebrities each played a part in the name’s rapid rise.

A name propelled to the top by a hit song and a string of celebrity births? A Top Ten smash that had previously failed to crack the Top 100?

It could make the baby name Ava feel like a trendy pick, possibly a fleeting choice.

Instead, the baby name Ava transformed to a modern traditional. Women of accomplishment, like filmmaker Ava DuVernay, come to mind. And a long history of use makes Ava feel nearly classic – even if the numbers don’t quite bear that out.

Even as Ava sits at peak popularity, the name continues to appeal. Maybe it’s the short, sharp sound. Or could it be that Hollywood glam continues to make the baby name Ava feel distinct?

It’s a name of our moment, one that works from childhood to adulthood with no alteration required.

The only drawback is that your daughter maybe sometimes have to share.

What do you think of the baby name Ava? 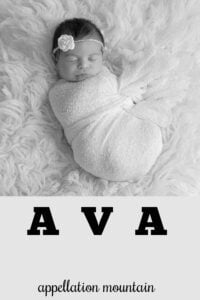