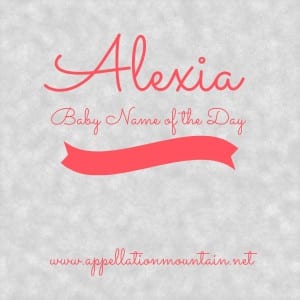 Frozen potato product or logical evolution of the classic Alexandra?

Thanks to Virginia for suggesting Alexia as our Baby Name of the Day.

Alex- names have had a good run.  Alexandra peaked in the 1990s.  Alexander has spent the last few years in the US Top Ten.  And, of course, they’re both venerable classics, worn by saints and royals, inventors and performers.  Their popularity has varied over the years, but it is tough to go wrong with any form of Alex.

But remember that they haven’t always been common.  Alexandra, at least in the US, was seldom heard until well into the twentieth century, sort of where Cordelia is today.

This tracks with her use in France, where she peaked around 1996.  But Alexia isn’t necessarily French.  I’ve also found her in use throughout Scandinavia, South America, Greece, and Europe.  The name traces back to the Greek Alexios and Latin Alexius, so little wonder she’s a feminine form in many lands.

In English, she’s a name at the crossroads of two trends: while Alex names are fading, especially for girls, -ia ending choices are booming.  In our age of Sophia, Olivia, Amelia and lots of other ends-with-ia possibilities, Alexia might sound fresher than Alexandra.

But Alexia has her drawbacks.  One oft-mentioned problem is the condition alexia.  In this case, it comes from lexis – word, in Greek.  The ‘a’ prefix means without, so a person suffering from alexia is without the ability to understand the written word.  It’s something like dyslexia, but usually refers to those who suffer brain damage later in life.

And yet, I’d argue that’s something of a coincidence that hasn’t necessarily hurt her.  The name has been worn by:

It’s a globe-trotting name, hard to pin down.

As for the spuds, Alexia is a part of ConAgra Foods.  Their website attributes the brand’s origins to a chef named Alex Dzieduszycki.  And why not?  Alexia is just as reasonable a feminine form as Alexa or Alexine.

A high-profile Alexia could still boost this name, but for now, it feels like she’ll fade with the rest of the Alex names.  But Alexia deserves as place as part of this classic name cluster, an appealing possibility that would still wear well for a girl in 2014.