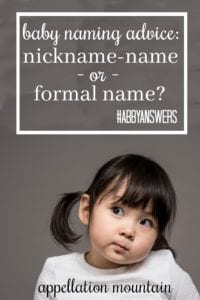 And … drumroll please! This isn’t just a post, it’s also the launch of a video series called Abby Answers: Your Most Pressing Baby Naming Dilemmas, Resolved.

Today we’re talking about one that vexes so many parents: Does Jake/Millie/Lucy/Nate/Gia need a formal name?

Feelings run high on this topic. Some parents won’t use a name like Lucy because it sounds like a diminutive. (Even though it’s not!) Others far prefer to write their child’s everyday use name on everything, so he’s Theo, not Theodore.

Me? I’m a nicknamer. But that doesn’t mean you have to be, too.

I’ve argued the question both ways:

I mentioned in the video that plenty of nickname-names are more popular than their formal names.

At first glance, it appears that nickname names are replacing formal names for girls at a faster pace than boys, but I’m not sure that’s the case. Just beyond the Top 100, names like Max, Kai, Jude, Finn, Beau, and Jax straddle the formal name-nickname line. Mini names are big for boys and girls alike, and some – like Eli and Ian – might be short for something longer, even though they’re complete names on their own.

Names evolve. As the linguist John McWhorter says, “Language is a parade …” What feels like a formal name today might be perceived differently in another generation, and that’s true for nicknames, too.

As in all things naming, it’s always best to use the name you love. Even if that’s a name that others may occasionally perceive as a nickname.

Where do you fall on the debate: do you prefer formal names? Or would you rather put the name you intend to use on your child’s birth certificate?