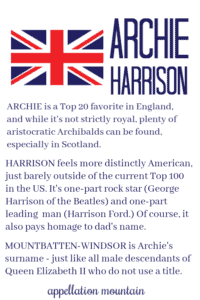 He arrived on May 6, 2019. At present, he’s seventh in line to the British throne and the future Duke of Sussex.

Theo outranks Theodore; and Reggie, Ralphie, Ronnie, Teddie, Vinnie, and Bertie have all gained in use in recent years – to name just a few.

While it’s not expressly royal, many an aristocrat has answered to Archibald, especially in Scotland. (Not only is Harry the Duke of Sussex, he’s also the Earl of Dumbarton – which refers to a Scottish earldom. More on that in a minute.)

Archie: Baby Name of the Day

If Archie is impeccably English, then Harrison? With apologies to Beatles member George Harrison, this middle name nods to mom’s homeland.

We love all of those -son ending names for our boys, and Harrison sits just outside the current US Top 100.

But it also references dad’s name, without venturing into junior territory.

Even though I’m calling it American, it’s worth noting that Harrison has been a Top 50 pick in England since 2001 – making it more popular in the UK than the US. But I think Harrison’s vibe is very American.

Harrison: Baby Name of the Day

By custom, the eldest son of a Duke can use his subsidiary title. So they could choose to call baby Archie by dad’s second title instead: the Earl of Dumbarton. Harry’s uncle, Prince Edward, Earl of Wessex, follows this pattern. His son is known as Viscount Severn.

But Harry and Meghan are going their own way, announcing that their children will not carry royal titles. This means we’ll refer to their son as Master Archie Mountbatten-Windsor.

What’s up with that double-barreled surname?

Up until 1917, the royal family had no surname. They were all just HRH Prince This or HRH Queen That. That’s still pretty much the case for royals today – except …

In cases when a surname might be required, they often use their territorial designation. So William and Kate’s firstborn would be George Cambridge.

And in 1917, as World War I was underway, King George V decided to change the name of his family’s house from the very foreign Saxe-Coburg-Gotha to the oh-so-English Windsor, a name they borrowed from one of their favorite castles. He also indicated it would be the family’s surname.

When the future Queen Elizabeth II married Prince Philip in 1947, they became Mountbatten-Windsor … because Philip’s surname was Mountbatten.

If you know your royal history, you’ll know that Prince Philip was a prince of Greece and Denmark. So what’s with that surname? His grandfather was Prince Louis of Battenberg. Prince Louis was born in Austria, and grew up in Italy and Germany. But he joined the British Royal Navy at the age of fourteen, and rose through the ranks, eventually becoming an admiral.

I think Meghan and Harry hit the mark.

The name balances their son’s English and American roots. It feels accessible, without being too trendy or novel. And it acknowledges that while he’ll almost certainly enjoy a life of tremendous privilege, there’s almost no chance he’ll inherit the throne, as he’s behind his three close-in-age cousins, as well as an earlier generation. That means his name doesn’t need to be as ready-to-rule as, say, cousin George or Charlotte.

It’s not a choice I heard discussed much beforehand, and yet, they might have surprised us more. It seems like they’ve stuck to William and Kate’s playbook when it comes to choosing baby names: current, not trend-setting.

What do you think of Archie Harrison?