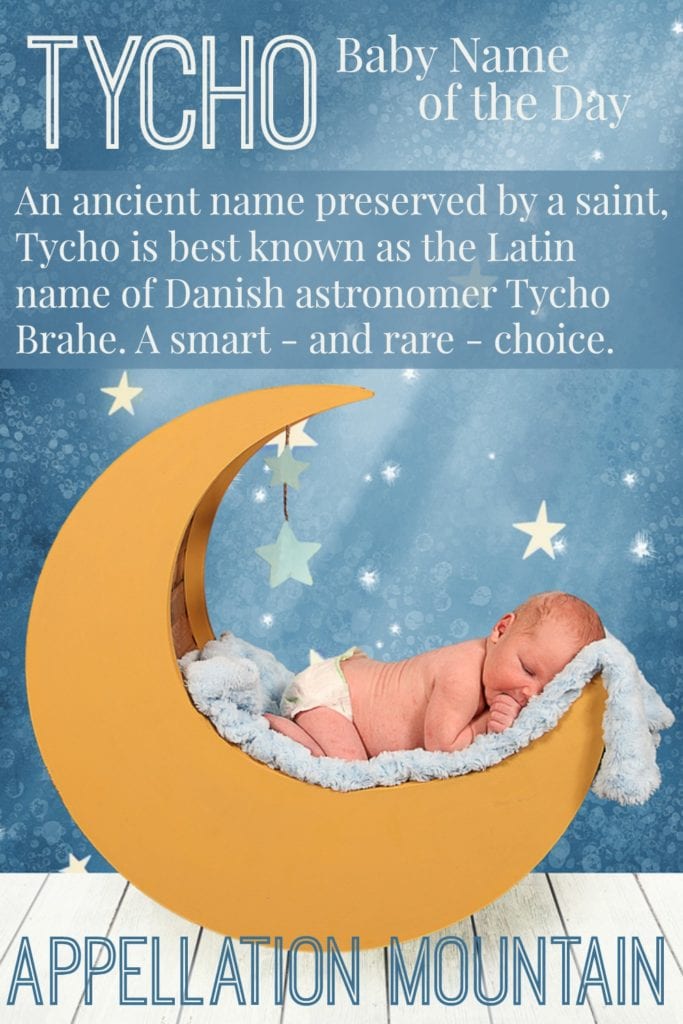 Tycho makes for a rare name with history aplenty, combined with an on-trend sound.

If you love a good meaning, this name delivers. It comes from Greek, and means “hitting the mark.”

In the fifth century, Saint Tycho or Tychon served as Bishop of Amathus, Cyprus. He is remembered for two things: eradicating the last vestiges of paganism, and restoring the island’s wine-producing vines.

Well before the saint, versions of the name appeared in ancient writings.

The goddess Tyche ruled over luck and good fortune. She sometimes appears as a companion of Nemesis. Other accounts reference Tychon, a god of chance and companion of Aphrodite.

Chances are that the saint deserves credit for the name’s continued use. Well before he ascended to serve as bishop, he was famed for his generosity. The son of a baker, he once gave away every last bit of bread they could bake from their family’s stores, only to return the next morning and find their supplies replenished.

This makes the name fortunate and generous, too.

Should you recognize the name, chances are it’s for a very different reason.

While the name atrophied in most languages, in Danish, it persisted. It evolved into Tyge – a sound I cannot quite describe.

The well-born Tyge Brahe received the best education available to a sixteenth century Danish nobleman. Astronomy caught his interest early. He prized accuracy in measurement, and developed instruments to make it possible.

He recognized that the Moon orbits the Earth, while the planets revolve around the Sun. (Though he incorrectly persisted in believing that the Sun revolved around the Earth.) His measurements proved the existence of supernovas, discovered more about comets, and built a large-scale astronomical observatory.

It makes for quite the impressive resume. If you love science names or celestial ones, Tycho could fit.

You might also hear this name and think Tyco. Established in the 1920s, it first built model trains. The name came from the founding family – the Tyler Company. In the 1980s, Tyco manufactured ViewMasters and baby dolls, making it broadly familiar to a generation. It created the blockbuster Tickle Me Elmo toy in the 1990s.

But you won’t find Tyco in the toy store today. It was sold to Mattel in 1997. For children born today, the name means little.

Tycho: By the Numbers

Maybe the long-time association with the brand name explains why there are so very few boys called Tycho.

And yet, we like Ty. Tyler and Tyson have done well recently; Tyrone appealed in the 1950s and 60s. Even the two-letter Ty charts in the US Top 1000.

Use has trended up, but slowly. Parents named 26 newborns Tycho in 2014; a year later, the number dropped to 15.

Believe it or not, you’re more likely to meet a boy named Tiger.

The name trended upwards following the debut of webcomic Penny Arcade. Running since 1998, it’s the tale of two gamers’ adventures. Their names? Gabe and Tycho, the latter named for the astronomer.

This suggests that parents could fall for Tycho – if only they thought of it as an option for their children.

If a rare boy’s name with history galore and a modern sound appeals to you, Tycho certainly hits the mark.

Can you see this name catching on?