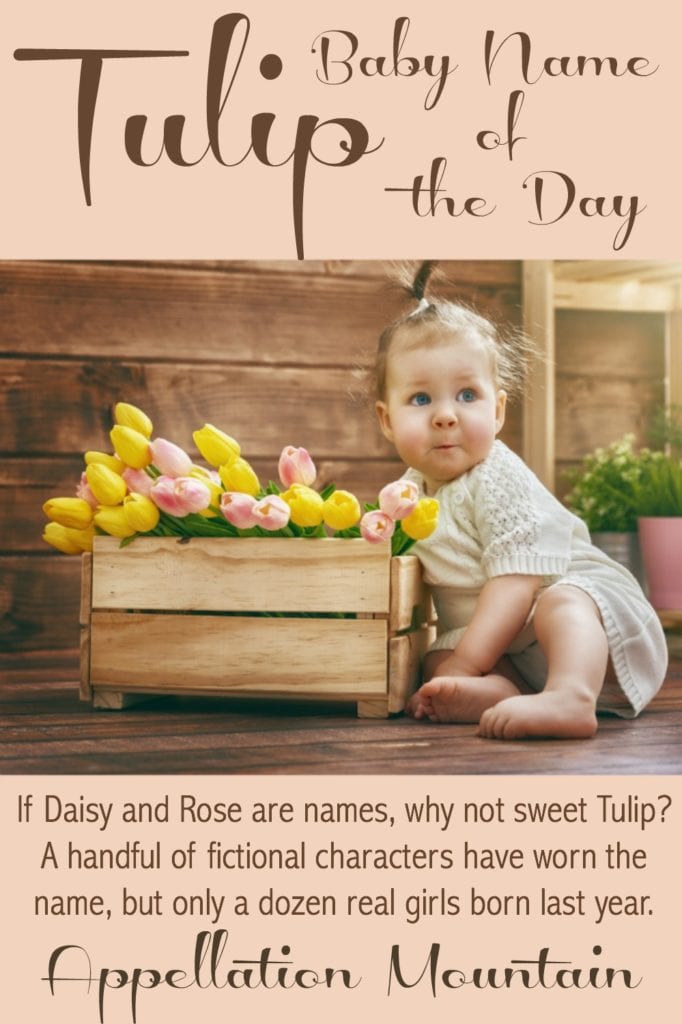 Love Daisy and Rose, but looking for something less popular? Tulip might be the flower name for you!

Our Baby Name of the Day is inspired by a character in new animated movie Storks.

We think of tulips as Dutch, but the flowers originally come from Turkey.

In Turkish, tülbent means turban – the shape some thought the flowers resembled.

The word was whispered down the alley to the English form we recognize today.

In the sixteenth century, an ambassador to Turkey from the Holy Roman Empire shipped some of the flowers home to Vienna.

A professor at the University of Leiden observed that the flowers were well-suited to the local climate, and soon, the Dutch were wild about tulips.

Why so much enthusiasm for a bloom? The vivid, intense colors were unlike anything Europeans had seen before. And the Dutch were recently independent and quickly amassing wealth through trade. They built large estates, with grand gardens to match.

Those gardens were quickly filled with tulips, leading to what many consider the world’s first economic bubble, in the 1630s, when contracts for bulb futures reached a fever pitch.

Tulip: By the Numbers

But does anyone actually answer to Tulip?

Even in Hollywood, the only example of use is one of Rebecca Romijn and Jerry O’Connell’s daughters, Charlie Tamara-Tulip, twin to Dolly Rebecca-Rose.

And yet fictional bearers of the name abound. Consider:

Since the comics have inspired an AMC series now headed for a second season, that’s one reason we might hear more of the name.

Or maybe Storks will deliver. The new animated movie hits theaters in late September 2016. The movie’s Tulip is a girl with bright red-hair, the only human employee among the delivery birds.

Daring flower names for girls are everywhere. Magnolia ranks in the US Top 1000. So does Azalea.

I often wonder if Tiny Tim’s ukelele hit from the 1960s gives parents pause. “Tiptoe Through the Tulips” debuted in 1929, but became a major hit for Tiny Tim in 1968. The quirky tune tends to stick in my head, repeating on an infinite loop. But is it really that off-putting? After all, Herbert Khaury – the musician we all know as Tiny Tim – named his daughter Tulip Victoria way back in 1971.

If you love nature names, and want something decidedly different, it’s worth considering this bold botanical possibility.

What do you think of Tulip? Would you ever consider this name for a daughter?