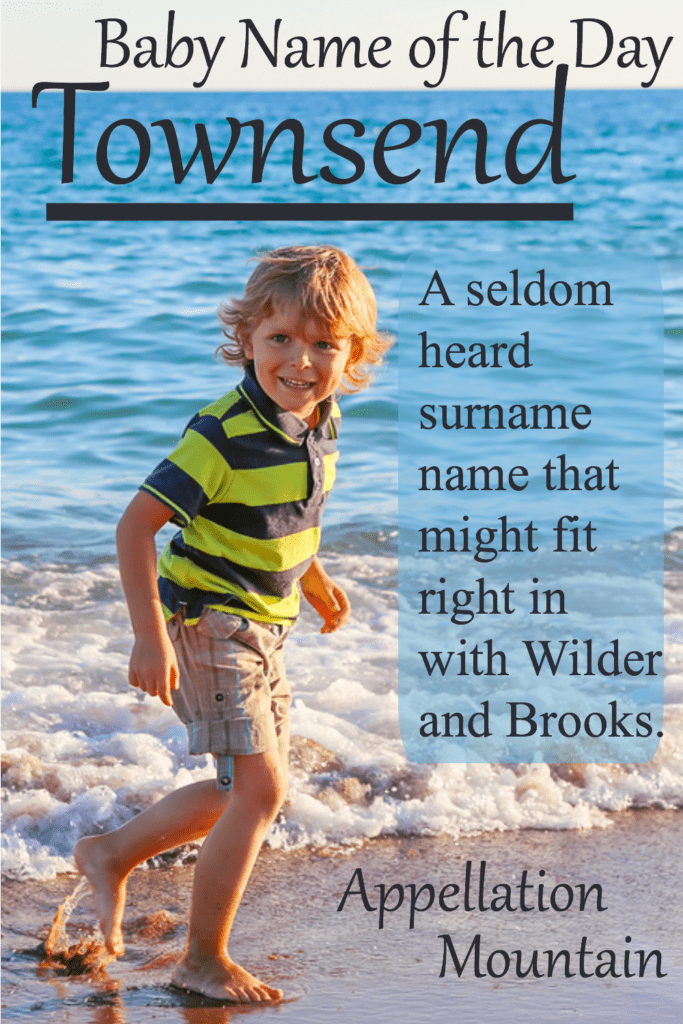 Townsend brings to mind legendary musician Pete, while mixing in a preppy, buttoned-down, and even Southern sensibility.

Thanks to Carolyn for suggesting our Baby Name of the Day.

In Middle English, when we reached the end of a village, we stood at the touun ende. Someone who lived there eventually adopted the description as their surname.

They’re found in Yorkshire and Norfolk, and maybe a few other places, too.

It’s common enough that you’ll find the name on maps throughout the English-speaking world.

A handful of notables have answered to this surname as a given name:

But even more have worn the name as a surname.

Peter Dennis Blandford Townshend – an alternate spelling of the surname – was born in London in 1945, the son of professional musicians. He joined his first band in 1961, scored his first hit in 1965 with The Who. More than two dozen hits followed “I Can’t Explain,” including rock opera “Tommy” and enduring anthems like “Baba O’Reilly.”

Townshend wrote nearly all of The Who’s 100-plus songs, but was long known for his tendency to destroy instruments on stage.

The Rock and Roll Hall-of-Famer lends a lot of edge to this otherwise buttoned-down name.

Speaking of edge, here’s a fun fact. Charles Townshend served as Chancellor of the Exchequer under King George III. He authored the acts taxing the American colonies. While several were eventually repealed, the Townshend Acts’ tax on tea remained.

You know the rest of the story.

Townsend: By the Numbers

Parents love place names and surnames, and there are some interesting stories attached to this one.

But is anyone actually naming their sons Townsend?

In 2013, two dozen children were given the name. Last year, the number was eighteen.

I couldn’t find any other Town- names in use in even small numbers in the US, but 2009’s The Lace Reader included a female main character called Towner Whitney. Rumors of a big screen adaptation of the novel have fizzled, but that might be the best hope for a big boost in the number of Town- names used in the US.

And yet, Townsend is a name that could wear well. It fits in with two-syllable, ends-in-n (sort of) names for boys. In many ways, the name feels like a Southern family name handed down over the generations. But ties to The Who lend it a rock ‘n roll sheen. It might be a brother name for Brooks or Wilder, or other preppy hellraiser names.

Overall, this name remains rare – but that might be exactly what many families are after.

Would you consider Townsend for your child’s name?