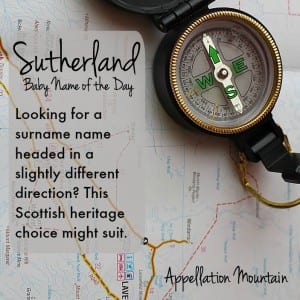 Surnames are hot, and the actor that wears this name is very Hollywood cool.

Thanks to Sarah for suggesting her son’s name as our Baby Name of the Day: Sutherland.

Sutherland is a surname name that fits right in with Easton and Westley. The direction this name heads? South, of course.

Except it’s best known as a Scottish name, so it’s reasonable to ask south of what, precisely?

In this case, Sutherland is a relic of Norse rule of Scotland. The Old Norse suðr meant south, and the land was south of Scandinavia, as well as other Norse colonies.

There’s a Scottish Earl of Sutherland, and it’s used as a place name throughout the world, including South Africa and New Zealand, as well as a handful of places in the US.

The most famous bearer of the name is Hollywood’s Kiefer Sutherland.

Plenty of surnames end up as given names, and we’ve been especially fond of borrowing star-powered Hollywood surnames in recent years. Think Aniston and Winslet, along with musical legends like Lennon, Marley, and Hendrix.

Back to the last name.

It’s very rare as a given name in the US – so rare that it’s never been given to even five children in one single year.

And yet, it’s broadly familiar. Clan Sutherland is a Scottish clan with the tartans to prove it. That’s their crest above – sans peur means without fear.

Plenty of notables have worn the surname, including:

Sutherland: Under the Radar

All of this makes Sutherland one of those great secret names.

It shares sounds with the popular Landon, the up-and-coming Landry, the invented Ryland, and the retro revivals Roland and Leland. On the girls’ side, place name Ireland is a recent re-entry to the US Top 1000.

Directional names are having a moment, from mainstream Easton to Kim and Kanye’s North West. And while Sutherland’s south is subtle, it’s clearly there.

Spelled Southerlyn, this feels more like a feminine choice, along the lines of Avalyn or Caralyn.

If you’re looking for a name that’s off the beaten path, but still feels familiar, Sutherland is one to consider.

What do you think of Sutherland? Do you like directional names in general?