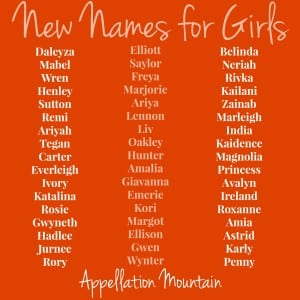 Some were retro revivals, names re-entering the rankings after long absences. Others were completely new.

New Names for Girls: 51 Names Debuting or Returning in 2013

Retro Revival – Mabel, Marjorie, and Margot are back! So is Roxanne, a lovely, literary Persian name that was all over the radio in the 1970s and 80s. Belinda is back – though she hasn’t been gone for long. The Welsh Gwen also returned in 2013, and I think Gwen is a name to watch.

Surnames – We love surnames for boys and girls, but the names aren’t always the same. Sutton, Henley and Ellison debuted in the US Top 1000 in 2013, but only for girls. Others are more equal opportunity, including 2013 girl debuts Oakley, Hunter, Carter, Elliott, and Lennon.

Imports – There are some truly gorgeous imports on this years’ list. Gwyneth could make the pop culture list, but somehow I think this is less about La Paltrow and more about the lovely Welsh name. Freya, Astrid, and Liv come to us from Scandinavia, Rivka from Israel, Kailani from Hawaii (does that count as an import?), and Zainab from Arabic. Amalia could be a respelling of Amelia, or it might be a borrowing from overseas.

Nature Names – Wren, Magnolia, Ivory – there’s no shortage of possibilities in this category. The three names are ones embraced by parents in 2013.

Creative Spins – Part-Ava, part-Evelyn, part-Adalyn, Avalyn debuted in 2013. Some of these names hover at the fringes of the rankings for a few years before fading. Others catch on. My guess is that we’ll be hearing more of Avalyn. Amia seems to be a twist on Mia, with influence from Amy and Amaya.

Borrowed from the Boys – I know – it’s a source of much controversy. But every year there are a few name on the girls’ US Top 1000 that were formerly reserved for boys. The French Remi arrived in the girls’ Top 1000, even as Remy raced up the boys’ chart. Could it be that we see the ‘i’ spelling as feminine in the US? And Rory, a climbing Irish favorite for boys, also debuted for girls in 2013. Here’s an interesting one: Neriah. It’s the name of a minor male figure in the Old Testament, but it seems to have a much longer history of use for girls, at least in the US.

Short and Sweet – Karly, Kori, Rosie, and Penny all cracked the US Top 1000 in 2013. They’re part-variant spellings, part-nicknames as given names.

Visions of Grandeur – The boys’ list included Royal and Duke. Girls rule, too, with Princess entering the US Top 1000 in 2013.