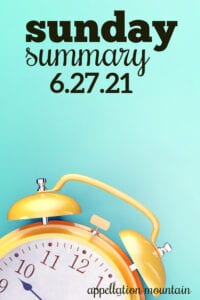 We’ve all had those moments.

Like in that Talking Heads song. “This not my beautiful life.”

Or, to cut to the point: And you may ask yourself, “Well, how did I get here?”

Life changes. We change! And sometimes the person we were twenty, ten, or even five years earlier seems like a stranger to our present self. Most of us can probably list a handful of things about ourselves that have been true since childhood … but only a handful.

That can lead to a dilemma: should I name my child for something that I value presently … but which could prove temporary?

After all. our favorite athlete might be traded to our home team’s arch rivals. An admirable fictional character could disappoint. (Looking at you, Khaleesi.)

But those are obvious examples, the kind of things we can all imagine ending badly. (Or maybe just awkwardly.)

What about the more seismic changes in our lives?

The family name from your partner’s side that you’re pressured into using … only to have that relationship end badly?

The names that signify deeply held religious beliefs … that you later abandon.

A name borrowed from a hero – artistic, political, or some other kind … who we later learn behaved in ways you find despicable.

So often, the best names are imbued with rich, personal meaning. But there’s no promise that a meaningful choice in 2021 will still resonate in 2032.

Despite that, I think it’s almost always worth the risk.

We can’t think of names like shoes, to be updated every season. We have to name for the long and unknowable future. That means thinking twice about names that reflect a present obsession, but embracing names that reflect where we are personally at any given moment.

If you’re grieving the loss of a loved one, handing down their name to this child can make all the sense in the world. Or if you’ve just returned from a long-planned trip to Italy, naming your daughter Florence could be exactly right – even if your previous shortlist consisted of tailored surnames like Blair and Sloane.

In many ways, names function as time capsules. And that’s perfectly fine. We just have to accept that a name choice captures us at a specific moment – at 25 or 36 or 42 – when we’re growing our families. And even if we change – dramatically – it doesn’t make that moment, or the inspiration behind our child’s name, any less meaningful.

I love this story about director Jon M Chu naming his son, in part, for his new movie. Chu’s full name is Jonathan Murray Chu. He was finishing up In the Heights when he and wife Kristin Hodge welcomed their second child, Jonathan Heights – called Heights, after the neighborhood at the heart of the film. Chu has a history of naming children for films he loves and projects he works on – their daughter is Willow.

Which reminds me … it can be so hard to figure out the influences behind names! If asked about Ruffin, I’d be looking at surnames. Or maybe something related to Rufus/Rufinus. But nope. It comes from General Zachary Taylor – later President Zachary Taylor. His nickname was “Old Rough & Ready” and yes, boys were actually named Rough & Ready – or Ruffin Ready – in his honor.

Of course, it’s often much less mysterious circa 2021. We all knew why Meghan and Harry named their daughter Lilibet in a nanosecond. And why it soared to the top of the most-searched names list at Nameberry. What we don’t know: whether it will translate to a surge of children named Lilibet. I agree with Clare’s conclusion: we may very well see an uptick in Lily names, which have slid a little in recent years.

But it can still be challenging to unravel exactly how much a pop culture phenomenon matters. I liked this analysis of the Friends’ character names and what we actually named our children in the 1990s and beyond.

Just for fun: how much do I love the sibling set of Romilly Winter Bo, Cosmo Aubone Louis, and Iona Everly Wren? As always, this week’s list of birth announcements at British Baby Names is worth a read.

Can’t get enough name talk? Sign up for the weekly newsletter here: 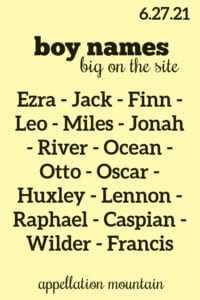 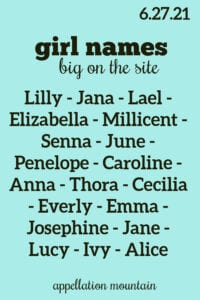