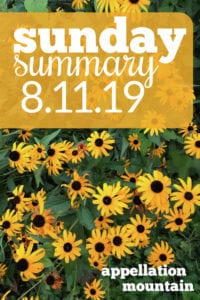 A few days ago, I took my teenager to see the latest Spider-Man movie. One of the previews reminded me that another installment in the Terminator franchise is coming soon, and I still haven’t seen them all. (Catching up on a long series feels intimidating. I mean … five movies plus 31 television episodes just to start? That’s a project!)

But if you go back to the 1984 original, you’ll recall that the killing machine played by Arnold Schwarzenegger was tracking Sarah Connor – ALL the Sarah Connors. He’d already hunted down a few before Linda Hamilton’s Sarah Connor foiled his plans.

And so, let’s consider The Sarah Connor Opportunity.

If we’re concerned with privacy in this wild world of ours, then perhaps the answer is easy. Choose a first name that verges on the anonymous. A Top 100 name. Or maybe a classic, used for so many generations you might hear it in seventeenth century as easily as the twenty-first.

Because Sarah Connor managed to be quite extraordinary, even though she was one in the crowd.

Everything about this story is fascinating. If you’re wrestled with changing your child’s name, here’s one tale of what happened, many years later, when the daughter debated reclaiming her discarded name.

Krysten Ritter named her baby boy Bruce! Names, they are a-changin’. His full name is Bruce Julian Knight Granofsky. Dad is musician Adam Granduciel; Granduciel is a stage name. Here’s hoping she talks about names in a future interview. I’d love to know what inspired their choice. All I can think of when I hear Bruce is this, but I suspect the name will grow on me.

Sure, there’s John and Joan, Henry and Alice. But most of the Top 50 Names from England in the late fourteenth century? They’re un-guess-able. Felice, Mariot, Godelena, Giles, Gervase, Hamond. Okay, the boys’ list feels far more familiar in 2019. But neither set of names is predictable, and both might inspire parents after an unexpected name with history. Meet my kids, Reginald and Clemence …

Isn’t Cosima just gorgeous? It’s one of those names I wonder why we don’t hear more. Kate has some background, including a discussion about possible nicknames.

Some of these flower names might work best in the middle, but the list of romance language flower names is worth a read. Which reminds me … I namespotted a woman named Flower. It wasn’t the kind of situation where I could ask about her name, but oh … how I would love to know the story! 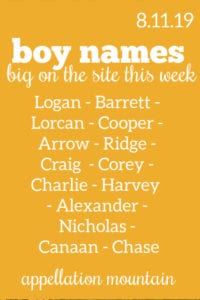 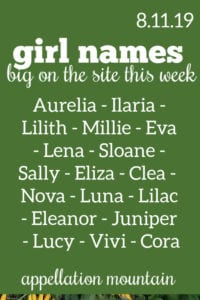