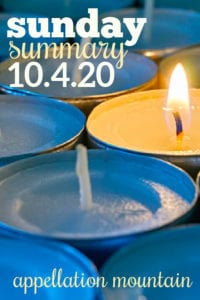 Life and loss are all around us.

Sometimes writing about new life brings me nothing but elation. Pure joy.

Rooney Mara and Joaquin Phoenix welcomed a son named River, in honor of Joaquin’s late brother. I teared up.

And then … Chrissy and John.

My heart aches for them.

Here’s the thing: I know so many families who have experienced the anguish of losing a child during pregnancy or birth. But most of the time, I hear about it after. In a hushed voice through from a mutual friend. A text or email.

This time, there was something so intensely vulnerable about those pictures of Chrissy. It hit me like a hammer. That’s what the people I know and love went through.

October is National Pregnancy and Infant Loss Awareness Month. If there are resources that you’ve found particularly helpful, please feel free to share them in the comments. And if you’re struggling right now, I’m doing my best to lift you and yours up in my thoughts.

Including, of course, that oh so famous family. Chrissy and John announced that they named their son Jack. Thinking of them today, too.

It also reminds me – again – of the power of names. We remember those we love by the names we call them. For River and for Jack, and for all those who love them.

Are you following @NamesDaily on Instagram? This list Alix recently shared is one of my favorites. Woody + Flossie + Tilly + Huck … I’d use them with formal names, of course, but I know lots of families who prefer to let nicknames stand on their own.

Billie Jean is the kind of name I would’ve LOVED to have when I was about twelve. So I got a big kick out of Nancy’s look at the double name’s origins. For proof that the name was impossibly cool in the 1980s, I submit Helen Slater’s turn in this all-but forgotten movie, The Legend of Billie Jean.

Love place names? This map is for you. Because no one is naming a baby Arkansas, but you might be surprised to see that Kansas and Jersey actually fare pretty well …

Celebrity baby name theft is a very twenty-first century phenomenon. Most of the time I advise parents to shrug it off, but I’ve definitely heard groans of “now everyone will think I named my baby after a royal/Kardashian.”

I love these comparisons of British versus American names from Roses and Cellar Doors. Hyphens are a thing in the UK that we really don’t handle the same way in the US. Which is wild, because I think of double names as quintessentially Southern. Maybe they’re just hiding in the data? 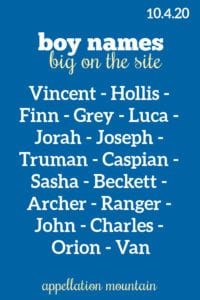 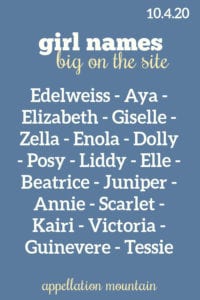