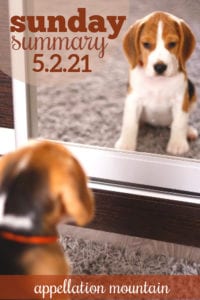 Maybe it’s because I’m still a rookie pet parent, but I feel like I’m learning something new every day. Often those lessons connect back to naming because, well, meeting lots of new dogs and their humans means hearing dozens upon dozens of new names.

The other day, I picked up my pooch up at the local doggie daycare.

“Darly, right?” the assistant asked as she looked up our record in the system. “We have a Daisy here, too, and they’re about the same size and fur color, so I just need to make sure I’ve got the right one.”

Daisy, of course, is a pretty common name – for canines and humans. Rover puts it at #4 for (female) doggos, way ahead of its showing in the US data, somewhere north of #150, but climbing.

Darly, on the other hand, is close to unique. I have to say “it’s like Charlie with a D.” Which isn’t foolproof, because we know more than one dog named Charlie – Rover lists it at #2 for male dogs.

So it’s an excellent reminder for all of us who love distinctive names:

Choose a unique name that sounds like very popular ones and the impact is diminished.

But that’s not necessarily a problem!

A rare name like Avalon might be confused for Evelyn and Adeline. Those popular choices also help Avalon sound more name-like.

Choose a unique name that’s nothing like anything anyone is calling their child, and well … you’re Elon Musk and Grimes.

Happily, there’s plenty of space in the middle. But if you’re after a truly distinctive name, scanning the US Top 100 and asking yourself if anything sounds too close to your favorite isn’t a bad idea.

Swistle has an update on a sister for Theodosia “Teddy” and Philippa “Pippa.” So glad they used Wilhelmina, but I’ll admit I was hoping they’d nickname her Billie.

Nancy shares some backstory on Viveca. This is one of my favorite very rare names that would fit right in. Though I think Vivica A. Fox has cemented the two-I spelling as the most familiar to my brain.

The new Disney-Pixar movie Luca is set to hit theaters in June. Will it boost Luca even higher? The name has been a fast-rising favorite, new to the US Top 100 in 2019.

Could K-pop launch Lalisa? Other than a vague sense that I’ve heard their crazy catchy songs in the background, I don’t know much about K-pop. But I imagine there’s plenty of potential for impact, especially with a massive fan base of future parents.

Did you spot Sancta Nomina’s report on real-life Chilton names? Love the whole concept and especially the Gilmore Girls reference. And it occurs to me – my high school was pretty Chilton-esque, and names were definitely different there. (And still are.)

Can’t get enough name chatter? Sign up for the Tuesday newsletter here: