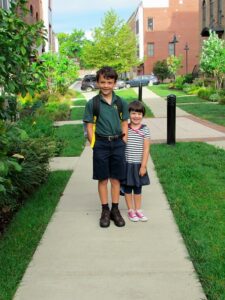 Happy Labor Day weekend to all of our American readers.  This marks the end of the summer season in the US, and the official return to school.  Aly and Clio actually went back last week.  Their classes are packed with fantastically named kids, but hey – this is metro DC.  Internationally eclectic is our normal.  It’s interesting, because I find that names from cultures completely foreign to me take a while to really stick in my brain, but the kids seem unfazed by it.

My favorite name-spotting comes courtesy of Clio’s lunchbox.  She has it behind her back in this pic, but it is Delancey Doggie from the Big Apple Buddies line at Built NY.  The other lunchboxes are Cornelia, MacDougal, and Astor.  I’d be charmed to hear any of those names on a real life kid.

I’ve said it before, but it bears repeating: the longer I write about names, the more tolerant I become.  Four and half years in, I’m less convinced that there are any rules at all, and more convinced that many attempts to define rules can easily become snobbish, even cruel.  (Insert any variation on your child will be teased with the name Deklin/Ranger/Celestia/Ryanne/Loveday here.)

But then I hesitate, because if you’re really stuck for a name, it would be nice to have some guidance.  I’ve been kicking around starting a series on this topic, but I fear it will too easily become rather negative.  Maybe over the winter … which will be here before we know it!
Other baby name news from this week:

That’s all for this week!  There’s nothing in the pipeline for tomorrow, as in true Washingtonian fashion, I am closing for the federal holiday.  I’ll still be over at Facebook, though, so you can head there for your name fix.  Thanks, as ever, for reading.