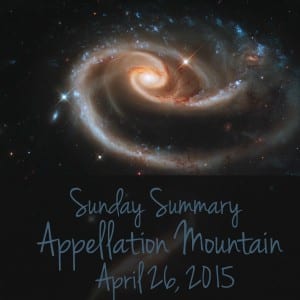 We live a few miles outside of Washington DC. Many, many of my neighbors are involved with important, weighty, world-changing things. We’re between two major universities, which means that we know poets and philosophers. People who have lived all over the world. We’re quite close to a major NASA facility, so we also know a few rocket scientists. That’s not to say that we move in rarified circles. It’s just that ordinary jobs here are sometimes not so very ordinary.

In the midst of this, my work is … different. I’m much more likely to have Kardashians or Duggars or Will and Kate on the brain than world events, be they devastating or uplifting.

Early days, I rarely talked about my blog work. My government day job, yes. Because it was kind of like everybody else’s government day job, and so it felt safe and acceptable. Now that I write full-time, I still dodge the question of what I do sometimes. “I run a website.” And only if they keep asking to I reveal my lifelong obsession.

And yet, over the years I’ve come to see that names are about life, and all its glorious and heartbreaking complexity. There’s nothing frivolous about new life, about family.

In recent weeks, I’ve heard about heartache. Despite all the advances of our modern and sometimes nearly-magical world, there is infertility and loss. Adoptions fall apart. Pregnancy can be filled with risk and worry. And yet, there are miracles – an international adoption that will go through quickly, despite some initial uncertainty. A long-awaited healthy pregnancy.

While some of what comes up in the world of baby names is fluffy, even funny, at heart, naming another human being is an act filled with tremendous joy and hope. It’s a privilege to be a part of that journey with so many families.

On to the baby name news: