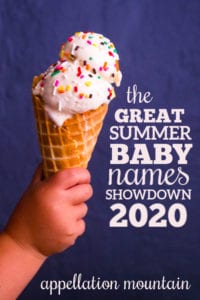 Normally, we spend our summer choosing among the best of the new names to debut on the US popularity charts in May.

The US popularity data release is delayed indefinitely.

So instead, we’re going to revisit the past champions of March Madness Baby Names, our annual good-bye winter, hello spring contest which bears only a passing resemblance to the college basketball competition.

We’ve been playing every March since 2011. So if the NBA can re-start basketball in July at Disney World, then we, dear reader, can bust out some bracketology and choose the very best of the past champion baby names here and now.

This opening round will be a little different. We’ve been playing for nine years, but up until 2015, we’d never had a repeat winner. That year, Cora successfully defended the title … and we decided that all winners would be retired, going forward.

So this time we have to narrow our pool from nine to eight. I know, I know … yawn. So here’s how it will work: vote for your favorite out of these nine names – the one you’d actually consider for a daughter, or would love to hear on someone else’s kid.

While this will only eliminate one name, it will also determine the seeding for the contest going forward. And that can matter lots, because March Madness veterans know the difficulty of choosing between their two very most favorite names in the quarter-finals.

While there are some style differences, this list makes me so very happy. First, because it reminds me that Appellation Mountain readers really do love great names – what a happy thing to build a community around! But more importantly, these sound sort of like sisters. Or at least, they’re in the same family. Names that win tend to be rising favorites (though we often choose them before they’re really big) and almost always have plenty of history, too.

Of course, the similarity just means it will be That Much harder to narrow the list to one champion of champions.

This round will stay open until Tuesday, July 7th. Look for the boys’ contest going live on Saturday, July 4th.

Do you have any early favorites? 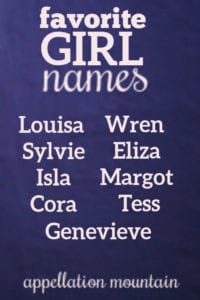