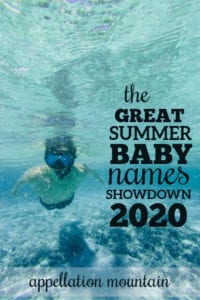 We do this every summer, but 2020? It’s a little different. (How’s that for an understatement?)

Normally, we vote our way through the best of the names newly debuted in (or returned to) the US Top 1000. Except the US popularity data release is delayed indefinitely.

But that misfortune has led to an opportunity.

We’re going to revisit the past champions of March Madness Baby Names, our annual good-bye winter, hello spring contest which bears only a passing resemblance to the college basketball competition. We’ve been playing every March since 2011.

If the NBA can re-start basketball in July at Disney World, then we, dear reader, can bust out some bracketology and choose the very best of the past champion baby names here and now.

This opening round will be a little different. We’ve been playing for ten years and have ten champions in the boys’ brackets, but we need to start with just eight contenders.

So here’s how it will work: vote for your favorite out of these ten names – the one you’d actually consider for a son, or would love to hear on someone else’s kid.

While this will only eliminate two names, it will also determine the seeding for the contest going forward. And that can matter lots, because March Madness veterans know the difficulty of choosing between their two very most favorite names in the quarter-finals.

Not every name shares the exact same style, but I think there’s something cohesive about the March Madness champs. First, Appellation Mountain readers really do love great names – and that makes my heart sing! It’s possible to imagine all ten of these names on brothers, or at least the same extended family.

That doesn’t make it any easier to choose just one, though, does it?

This round will stay open until Thursday, July 9th. Don’t forget to vote in the girls’ contest, too. 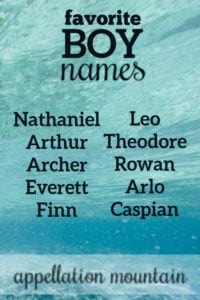