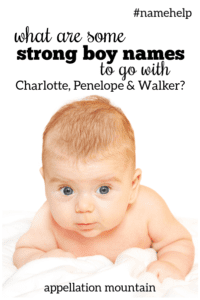 We have three children: Charlotte Amelia, Walker Navy, and Penelope River. Now we’re expecting another son. We definitely want a two+ syllable name because our last name is short.

I love Wilder, but it might be too similar to Walker.

My husband loves Legend, but I don’t think it matches our kids’ names.

Boy names are the hardest for us. My husband wants an epic, strong name, and we both don’t like classic boy names. But I don’t like anything from his list. Besides Legend, he’s suggested Major, General, and Rocco.

We really wanted an L name, except we’re not liking any. Suggestions?

Here’s the thing: epic boy names are trending. Maverick ranks in the current US Top 100. And Legend is in the Top 250. So it’s not a wild, bananas kind of choice.

It just doesn’t sound like a name you’re into. And it would be a little out-there with sisters named Charlotte and Penelope. Walker feels a little more modern, true – but it’s still firmly in the familiar names with history category. There’s photographer Walker Evans and novelist Walker Percy, to name two twentieth century notables.

But there are great, bold boy names that have some of Legend’s bravado, but feel a little closer to Walker in terms of familiarity.

Barrett – Maybe the most obvious direction is another surname name. Barrett can shorten to Bear, which is every bit as fierce and energetic as Legend.

Calder – There’s something outdoorsy about Calder. It shares the -r ending of Walker, and the same first initial as Charlotte, but I think it’s still different enough to work.

Everett – Names with the ‘v’ sound have an extra edge. One hesitation Barrett and Everett – they share the same ending as Charlotte.

Knox – There’s a whole category of boy names I call Americana: Knox, Boone, Ford, Twain. They’re short, strong choices with big sounds and appealing images. I like Knox best with your older kids’ names, but most of them could work.

Lawson – Okay, you’re loving the idea of L names, but Legend isn’t it. So how about Lawson? It’s another surname, true. But it has a different ending than any of your older kids’ names. And Lawson sounds like a lawman, an Old West sheriff, a little bit of a tough guy. But I think it’s far more buttoned-down than Legend, so it works with Charlotte, Penelope, and Walker.

Nash – If Knox is close, but not quite, maybe Nash would appeal?

Ridge – Nature names are a wildly popular category these days, but some – like River or Rowan – feel a little more gentle. Ridge strikes me as rugged, an outdoorsy name in the key of Wilder, one that conjures up mountains and trails in wilderness.

Weston – Lawson always makes me think of Weston – the Wild West, and the promise of heading to California to make one’s fortune in an earlier age. Like Wilder, it repeats an initial. But instead of sharing the -r ending, it’s an -n, which seems just different enough.

I’m stuck on Lawson. It starts with L, has that cool, home-on-the-range vibe, and still fits with Charlotte and Penelope and Walker.

Readers, what would you suggest? Or should they go with Legend instead? 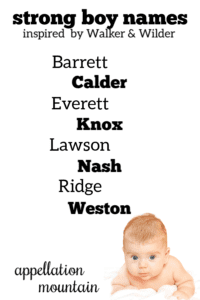