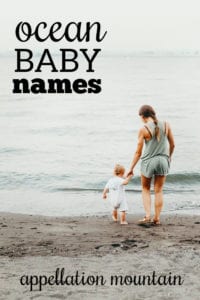 Ocean baby names take inspiration from the sea and the coast.

They tend to feel summery, but nothing says these names wouldn’t suit a baby born in January as well as July. After all, the seaside is worth visiting any day of the year.

Every one of these choices is a word name, and most of them qualify as rarer-than-rare. But a handful rank in the current US Top 1000, and a few more promise to join them soon.

Most of them lean unisex. Or, at least, they’re used in such small numbers that it’s tough to call them masculine or feminine.

If you love all things related to the seaside and the surf, this list might just inspire the perfect name for your child!

Short and modern Bay brings to mind the body of water – think San Francisco Bay – and also the slang term BAE – before anyone else, i.e., a girlfriend or boyfriend. It might be short for names starting with the letter B, but it got a boost as an independent name thanks to Bay Madeline Kennish, a character on ABC Family/Freeform’s Switched at Birth.

If you know your outdated slang, you might know that cove is an archaic word, something like chap or dude. But it makes this list because a cove is also a small sheltered bay. But is Cove too close to the health crisis to consider?

A harbor is a sheltered, safe place for ships to dock, either natural or man-made. It’s also a verb meaning to provide a safe place. It fits in nicely with modern word names like Haven, a sort of nature-virtue name. It might be easily confused for the very popular Harper.

Oceane – pronounced oh SAY ahn – has caught on in French-speaking countries. And the Greeks and Romans both used Oceanus for the god who personified the sea. Oceanus Hopkins was the name of the baby born to Pilgrim parents on the Mayflower. It’s rare today, but has more history than many ocean baby names on this list.

Rivers aren’t exactly ocean baby names. Except it’s the currently the most popular of the water-inspired nature names, the one that lights the way for many of the other names listed here.

It sounds just like the initial C, which might be a challenge. Except Jay and Kay, Dee and Vee have all worked just fine. Real Housewives of New York alum Kelly Bensimon has a teenaged daughter named Sea Louise.

Breaker brings to mind truck drivers. (Breaker is the equivalent of hello in CB slang. Or so I’m told.) Except it’s also a piece of reef against which waves break. The Breakers was the Vanderbilt family’s Gilded Age mansion on the Atlantic, in Newport, Rhode Island. Breaker fits in with rough-and-tumble names like Ace and Rogue, but it belongs with ocean baby names, too.

Crest might be all toothpaste to some, but a crest is also the highest point of a wave. It also means the top or the summit – or, as a verb, to reach the top. That makes Crest a modern virtue name. In the US, it’s probably too dental to wear as a first name, but it might make a great middle.

Delta sounds a little Southern belle, all Designing Women. Except Dax Shepard and Kristen Bell chose it for their younger daughter. It’s the name of the area where a river meets the ocean, and sediment deposits build up. Deltas can be inland, so like River, it’s not exclusively a beachy name – but it fits the vibe.

Doc is short for doctor, and has been worn by everyone from legendary Old West lawman Doc Holliday (born John Henry) to one of the Seven Dwarves. But a dock is a platform where a ship can park – or dock. The word’s origins are debated. And while Doc is slightly more common, Dock feels wearable in our age of Jack. Otis Redding’s enduring “Sittin’ on the Dock of the Bay” makes it musical.

Frank Herbert’s novel takes Dune in a sci-fi direction. But it’s a formation that protects from storm surges, found close to the ocean. In other cases, they’re ancient dunes, left behind from where water flowed thousands of years earlier.

Gale might bring to mind Dorothy or Abigail. Or maybe it reminds you of The Hunger Games‘ Gale Hawthorne. At sea, a gale is a wind. One red pennant is a small craft warning; two is a gale warning. Weather names, from Sunny to Rain, have a history of use.

I first thought of Key as a name when I was dreaming up ideas for the second Kardashian-West baby. (They named him Saint.) Key brings to mind Francis Scott (of “The Star-Spangled Banner” fame), locks, pianos, and, of course, Key West, Florida. In the last case, the word comes from two separate words, one meaning wharf and the other meaning reef or small island. Both put Key on the list of seasonal baby names. I think it would be a great, bold middle name.

Piers is a form of traditional Peter. It’s the source of our surname Pierce, also used as a given name. Pier is simply a word that originally referred to a support for a bridge, and later came to refer to a structure in a harbor, used for docking boats, fishing, or other sea-side pursuits. Famous places like the Santa Monica Pier reinforce that image.

It’s hard to say Tide and not think about the laundry detergent. And if college football is your thing, it might also bring to mind Alabama’s Crimson Tide. For American parents, the dual associations might take this off the list. But maybe, in the middle, it feels like a richly meaningful nature name.

Reed, Reese, and Reeve have all seen use for children in recent years, so how about Reef? A reef is a bar in the sea. Coral reefs are the most famous, but there are plenty of types. It’s a short, edgy, intriguing possibility for parents after seasonal baby names borrowed from the ocean.

Ridge brings to mind mountains more than oceans. But there are ridges hiding deep in the ocean – that’s what they call the places where the tectonic plates meet – and there are sand ridges on dunes, too. It’s rugged and tied to the seaside.

Surname Waverly has history as a given name, so how about just Wave? It might be more of a middle than a first, but it could work.

Any ocean baby names you would consider? What would you add to this list?