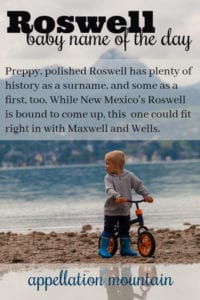 Thanks to Juliana for suggesting a name she’s considering for her new son as our Baby Name of the Day.

We’re not quite sure where this name originated, though we know it started out as a surname.

It could be a place name – though it’s tough to figure out where the very first Roswell might have been located. There are Rosvilles, too, and it might be cousin to that place name. Or it might come from Rosveldt, meaning field of roses.

What we do know, for certain, is that it appears as a surname over the years.

A great many surnames migrated to the first name spot, and Roswell is no exception. It has been used in small numbers, almost exclusively for our sons, for as long as we’ve been keeping track of such things. The name appears in the US Top 1000 a handful of times from the 1880s into the 1910s.

It appears in the history book as the given name of a number of notables. There’s a mayor of Little Rock, Arkansas; governors of Vermont and New York.

Attorney Roswell Martin Field might be the most famous. He represented Dred Scott and his family, when Scott brought the case against slavery to the US Supreme Court in 1853. The Court refused to let Scott sue for his freedom, and by 1861, we had the Civil War.

Still, that kind of fame wasn’t enough to move the needle on the name’s use.

Through the 1960s, we continue to find boys given the name in small numbers. But it’s dwindled since then, to just nine births in 2017.

I think I know why.

A half-dozen towns in the US share the name Roswell, but one looms larger. It’s not because of population or square footage, necessarily, but the place it occupies in popular imagination.

Way back in 1865, a group of settlers left Missouri and settled in the a part of what is today New Mexico. It took a few more years before a Nebraska businessman built the buildings that would serve as general store, post office, and an inn, in the same spot where the town eventually flourished. That businessman named the new settlement for his father, Roswell Smith.

The railroad came in 1893; NASA pioneer Robert H. Goddard used it as a rocket development site in the 1930s. And Walker Air Force base operated in the area from 1941 through 1967.

That summer, reports of an object crashing in the area gave rise to the belief that a UFO had landed. Some insist that an alien spacecraft arrived on earth, and the occupants were taken into military custody. A massive cover-up followed.

The military insisted that it was just a regular ol’ weather balloon that crashed.

Today the town is home to the International UFO Museum, and Research Center. There’s a gift shop, and it looks like the alien theme is found throughout the town.

If all of that sounds like a wild-eyed conspiracy theory and/or a kitschy tourist trap, you’re right. Except it’s the kind of story that continues to surface. From 1999 through 2001, The WB and then UPN aired Roswell, a show set at the local high school.

As you might guess, there’s an ordinary girl who falls in love with an out-of-this-world, not-so-ordinary boy. It’s based on a successful series of YA novels penned by Melinda Metz.

Even earlier than that, the alien crash helped launched mega-hit The X-Files in 1993. Since the most recent installment in the series aired in early 2018, never say never to future movies, mini-series, and television shows based around the X-Files mythology – and, of course, the UFO legends.

Despite all of this pop culture legend and lore, I don’t hear alien with this name. On the one hand, the association is so powerful it’s unlikely to fade during our lifetimes.

But Roswell fits right in with so many trends, from favorite Max-name Maxwell, to the recent rise of surname Wells as a given name. It also shortens to Ross, a long-time staple that’s recently left the US Top 1000.

I think it’s a preppy, polished possibility, one that leans a little offbeat thanks to the New Mexico site, but still falls on the right side of wearable.

What do you think of this name? Is it too associated with UFOs, or does it seem like an undiscovered gem?