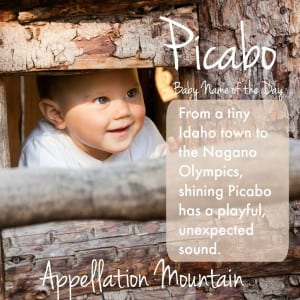 Sometimes a name isn’t a name … until one person comes along and changes everything.

Thanks to Nate for suggesting Picabo as our Baby Name of the Day.

In 1995, a skier with an unusual name won the World Cup downhill season title. She repeated the feat in 1996, and also scooped up a bunch of World Championship and Olympic medals in the 1990s.

By 2004, Picabo Street was in the National Ski Hall of Fame.

Maybe it was to be expected for a girl from a town called Triumph. The Idaho native was raised by progressive parents. They named their firstborn Roland, Jr. after dad, but then decided to let their daughter choose her own name.

I’m not sure if the parents had an intended deadline for name selection. But when she was three, the Streets headed out of the country. Picabo needed a passport, which meant she needed a name.

Picabo was the name of a nearby town.

Picabo: I See You!

Of course, it also sounds exactly like peek-a-boo – a game we play with babies. Peek-a-boo! I see you …

Developmental psychologists tell us that we play the game for all sorts of reasons. Babies don’t understand that objects still exist when they can’t see them, so peek-a-boo helps them develop a sense of object permanence. But the game evolved long before we understand why it was significant – some date it to the late 1500s.

Peek means to glance; boo has been used to startle since the early sixteenth century.

Only much later did the name of the game begin to refer to sheer fabrics or other revealing, peekaboo clothing.

But none of that has anything to do with Ms. Street’s name, or the Idaho town that inspired her.

And yet it’s not unknown. Ernest Hemingway went fly fishing in nearby Silver Creek. And the entire area is famous for skiing, at legendary Sun Valley.

There are lots of issues with Native American names. And yet, place names tend to feel a little more authentic, if only because they often reflect names with long histories of use. There’s a neighboring community called Silver Creek, Idaho – which seems like it supports the idea of Picabo’s meaning.

Which language gives us Picabo? I’m not sure. There are four federally-recognized Native American tribes in present-day Idaho, and at least five more with ties to the state.

My best guess was Paiute, an Uto-Aztecan language that would have been spoken in the right area and seems to contain the right sounds. William Bright’s Native American Place Names of the United States agrees that it is probably Uto-Aztecan.

Picabo: Beyond the Slopes?

1998 was the year that Picabo Street won Olympic gold in the Super G at Nagano.

It was also the peak year for Picabo as a baby name. Five girls were given the name. Others have used the name since – the person who made the request is dad to a Picabo.

Picabo is a rarity, indeed.

And yet, Ms. Street is thoroughly likable, and she’s remained in the public eye as a television commentator and spokesperson for the sport. It’s taken less to launch a successful baby name.

While Picabo won’t rival Isabella or Ava for the #1 name spot in the US, we’ll continue to hear this one in small numbers. And if you’re after an upbeat rarity that feels athletic and authentic, there’s something quite appealing about Picabo.

Would you ever consider Picabo for a child’s name?