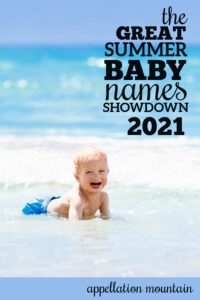 They were my picks to compete in the New Names Showdown of 2021. But it’s your vote that narrowed that list down over the month of July.

And now we’ve made it, to just two final names.

More on that in a minute.

The winning name will join past years’ champions Wilder, Shepherd, Wells, Archie, and Callahan. If you’re thinking we’ve got a pretty good track record of choosing the next big thing in boys’ names, you’re right! Every one of our picks has climbed in use in recent years.

So which name will join them? That’s up to you. And I can’t wait to hear which name you choose, because (maybe for the first time ever), my two favorites are the finalists!

Before we go any further, let’s review the semifinals results:

With nearly 60% of the vote, Everest conquered Zev. Brief and brisk Zev fits in with so many trends in boys’ names right now. It could be a brother for Kai, a substitute for Zane. But Everest proved unstoppable. It’s a compelling mix of nature name and virtue one – after all, is the world’s highest mountain, so it signals achievement. Plus, the name’s similarity to current Top 100 favorite Everett is a plus.

Leif took over 54% of the vote to advance over Adler. In recent years, Leif has teetered on the edge of the Top 1000. But it seems like it ought to catch on, right? We love Vikings. And the name bridges a sort of Old Norse strength with a gentle nature name vibe. (Even though, yes, it’s properly pronounced like Lafe, not Leaf.) Still, polished Adler feels like a surname name we could hear more of, too. So while Leif advances, every name that made it to the semifinals is worth keeping an eye on in the coming years.

Voting remains open until Thursday, July 29th. Check back on Saturday, July 31st to see which name wins it all!