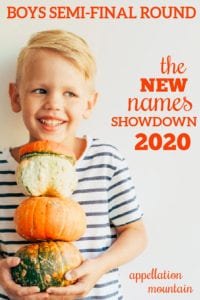 Thanks for voting in the boys’ opening round of 2020’s New Names Showdown. We’ve narrowed our list from eight contenders to just four.

Before we get to the next set of contests, let’s look back at the week’s results.

Mac handily defeated Rome. With 59% of the vote, the Jack-Max successor leaves the Eternal City in the dust.

In the closest contest of the week, Seven just brushes past Sekani. The meaning-rich number name pulled in just about 51% of the total. That means Seven advances, while The Hate U Give’s Sekani takes a seat.

Irish surname Callahan vanquished the French-Irish Kylian. Callahan is bright and bold, a boy’s name with just the right amount of swagger. It crushed Kylian, the French spelling of traditional Irish name Cillian/Killian. No, really – crushed! Callahan took 87% of the total.

Fast-rising surname name favorite Banks lost out to saintly, fiery Blaise. With a solid 60% of the vote, it’s Blaise that advances.

This round almost always surprises. I wasn’t sure what to expect in the Seven/Sekani contest. Both names are quite new, and probably farther outside the mainstream than their Top 1000 debuts suggest.

But Banks seems so much like past New Names Showdown winner Wells. And Kylian seems to fix Killian’s first-syllable problem so nicely. (I’d rather shorten my kiddo’s name to Ky instead of Kil.) And while Mac is plenty appealing, we’re wild for Roman … so I could imagine Rome taking off, too.

All that said, Appellation Mountain readers have a stellar track record of picking the next big thing when it comes to the New Names Showdown, especially for boys.

So let’s move on, and see which names will triumph in the SemiFinal round!

Two short names face off, but they couldn’t be more different. Mac is spare, casual – a nickname elevated to first name status. But Blaise feels weightier, the name of fourth century saint and a seventeenth century philosopher.

Seven isn’t quite like Four or Twelve. It carries meaning – there’s lucky seven, of course, but also the seventh day in Christian belief, the day that God rested. If we can name our daughters Sunday, maybe Seven makes sense. Facing Seven is Callahan, a bold, Irish surname name in the key of Sullivan, boosted by cool, casual nickname Cal.

Thank you for voting! Did you favorites advance?

Voting will remain open until Wednesday, October 14th. Check back on October 15th to see which names carry the day – and, of course, to vote in the final round!